Although we recognize the elevated prints on inflation and GDP will become more muted in the coming months, as the base effects of comparative numbers from a year ago will not be as stark, continuing issues with supply chains and unfilled job openings temper our economic enthusiasm. We believe the U.S. economy has recently entered a mid-cycle of expansion and the potential for a recession, while above zero, remains low for our three-year forecast period. A policy mistake by the Fed is one of the more prominent risks to our case for modulating inflation, a steady increase in wages, and economic growth, particularly in services as COVID variants run out of letters in the Greek alphabet. Recently released minutes from the Fed’s latest meeting reveal a level of zealousness in addressing inflation through advancing the curtailment of balance sheet expansion as well as hiking the fed funds rate multiple times in 2022 and likely beyond. As contrasted with short-lived inflation stemming from supply chain issues, the concerns of the Fed appear to be centered on fighting more durable inflation in the form of steadily increasing wages and rents and their congruent effect on long-run inflation expectations. The Fed will effectively be attempting to navigate a narrow channel of reducing the more pernicious aspects of inflation without detrimental effects on the labor market or economic growth. Narrowing this tight channel further is the extraction of fiscal stimulus. The generous fiscal provisions of the past 20 months have either expired or are expiring, and the passage of further legislation, especially in an election year, looks increasingly unlikely. Given the Fed’s intention for a series of rate hikes, the risks increase for a policy mistake. Yet if the Fed is deliberate and studied in its tightening in an attempt to normalize policy, we believe the chances for a mistake are markedly reduced. 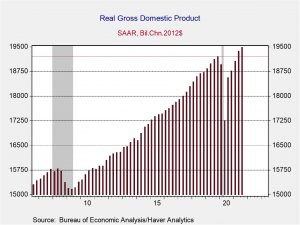 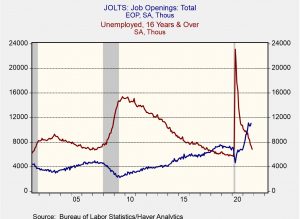 The economies of other developed countries are now mostly into expansion, mirroring the U.S. in terms of both rapid recoveries to pre-pandemic peaks as well as projected growth rates of over 5% for all of 2021, representing the highest rate of growth since the early 1990s. In response, several central banks have commenced reversals of their prior ultra-accommodative monetary policies. Although the ECB and BOJ are probably going to be exceptions, with the former projected to wind down its net purchases for just its pandemic response bond purchase program, the BOE, RBA, and BOC have fully curtailed their government bond purchase programs and have indicated their intentions to increase rates, joining the ranks of Brazil, Mexico, New Zealand, Norway, and South Korea, which tightened monetary policy several months ago. Moreover, fiscal support largely expired at the end of 2021, particularly in European countries. Not only are supply bottlenecks and inflation  as troublesome overseas as domestically, but the retraction of fiscal spending and monetary policy normalization produce a similar backdrop as in the U.S. Therefore, our expectation is that the global economy will continue to expand, albeit at a lower rate than last year. This expectation is tempered by the potential for policy mistakes, extended COVID mutations and related economic impact, and difficulties emanating from China. Beyond the saber-rattling toward Taiwan, concerns surrounding China include trade policies and premature loosening of credit conditions in the leveraged property market and the potential for corresponding negative effects on debt of other emerging markets.

We expect earnings growth to continue over our forecast period, yet at a slower pace than the rapid growth experienced last year. Concisely, we expect growth to increase at a decreasing rate. Similarly, we expect bottlenecks, inflation, and COVID to be peaking as well. We believe we are in the early portion of the mid-cycle of economic expansion, thus more cyclical lower market capitalization companies have particular appeal as they benefit from lower valuations and can adapt more nimbly to changing economic conditions. In normal periods, bouts of inflation can contribute to a lowering of P/E ratios. Core inflation is expected around the 3% level, and while we have no illusions that this time will be different, we believe it will disproportionately affect the mega-cap companies that have grown to encompass an unwieldy proportion of the U.S. equity market. As the accompanying chart indicates, the concentration of the largest companies has reached a proportion never experienced in U.S. equities. In fact, the top six account for nearly 25% as of this writing, all of which are names with a tech-heavy influence. It is often argued that the late 1990s experienced a similar concentration yet with a dearth of earnings. Our belief is that even with solid earnings, the concentration will abate over our forecast period and, by extension, contribute to a lower aggregate P/E level on the S&P 500.

In order to ameliorate some risk we find inherent in the attenuation of holdings, we maintain a significant bias of 65% to value stocks, where the concentration is far less. In addition, within U.S. large cap equities, we maintain the more cyclically oriented sectors of Materials, Financials, and Housing, and introduce a defensive position in the Health Care sector. Across the array of strategies there is elevated exposure to lower market capitalizations owing to more favorable valuations and their potential to deftly navigate a changing inflationary picture and Fed tightening.

Beyond the U.S., favorable valuations are even more compelling than in lower capitalization domestic stocks. Even with a stable or moderately strengthening U.S. dollar, stocks in international developed markets, specifically the Eurozone and U.K., still harbor solid appeal based on traditional valuation metrics alone. Should a catalyst develop that reduces the exchange rate of the U.S. dollar, which is overvalued relative to almost every currency by historical measures, this will further benefit U.S.-based investors in international stocks. Although developed markets hold appeal, the heavy influence of China on emerging markets and its attendant risk results in a void to emerging market stocks in all but the most aggressive strategy, where the holding is explicitly ex-China.

The anticipated termination of the Fed’s balance sheet expansion in March and the potential for the central bank to raise fed funds as many as four times this year leads to our modest expectations for bonds over the forecast period. As the accompanying chart indicates, real fed funds and the ex-post real 10-year Treasury note are at negative levels last experienced after the end of World War II. Although this does not necessarily portend dire consequences for bondholders, it introduces an element of caution that causes us to concentrate holdings in the short- and intermediate-term segments and reduce the prior heavy allocation to corporate bonds. Corporate bonds are near historically tight spreads. Similarly, the spreads of mortgage-backed securities [MBS] to maturity equivalent Treasuries are modestly tighter than average, leading to the exclusion of MBS in all strategies. 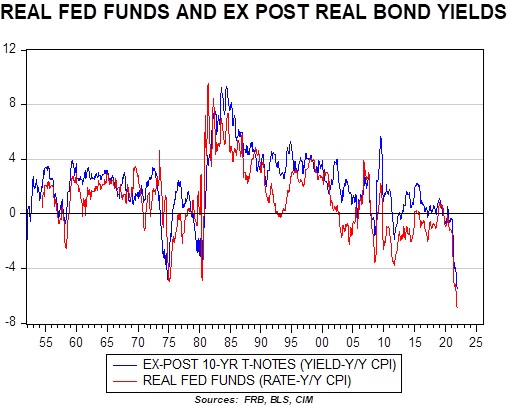 REITs have produced outsized returns over the past year. While the newer segments of data centers, communication towers, and warehouse fulfillment centers delivered another year of healthy returns, the traditional segments of hospitality, office, and retail fully recovered in 2021 from COVID-related investor fears. With REITs in the aggregate close to fully valued, especially in view of a more hawkish Fed, we find the potential risk/return profile to be more attractive in other equities.

Our expectation of a continuing global economic recovery, albeit at a less than frenetic pace, encourages an allocation to a broad-basket of commodities, with an emphasis on energy. We believe that the move away from oil will certainly not be abrupt; however, the restraint of capital for development of sources for new oil will hamper supply, while demand, though dampened, remains strong throughout our forecast period. Accordingly, we position a broad commodity ETF, the majority of which is in oil and its derivative products, across all strategies. In addition, we retain a position in gold across all strategies given its attraction as a haven from heightened geopolitical risk.