After an up and down year in both the stock and bond markets, 2015 ended roughly flat. The S&P 500 Index posted a total return of 1.4%, while the ML Domestic Bond Index came in at 0.6%. Throughout the year, we saw bouts of higher volatility as the markets wrestled with ongoing slow growth, tighter Fed policy and rising geopolitical risks. Unfortunately, as we’ve noted in the past, we could be entering a period of lower returns and higher risk. This doesn’t necessarily create an adverse investing climate, but it does underscore the importance for investors to appropriately position themselves according to risk tolerance and to properly calibrate reasonable return expectations.

What is behind this change in the return/risk landscape? Several factors are at play, but valuations are certainly front and center. Recall that during the last recession, valuations for many asset classes became extraordinarily low. As they recovered, the positive contributions to asset class returns were very significant. Then, valuations (and investor returns) were given additional boosts as the Fed engaged in a multi-year stimulative monetary policy known as Quantitative Easing. Easy monetary policy also lowered volatility across most asset classes.

However, as we look forward, similar valuation escalations appear unlikely. In part, it’s because we simply aren’t starting from an unusually low point. It’s also important to note that the Fed is no longer increasing monetary stimulus…it is in fact now doing just the opposite by raising short-term rates. We believe tighter monetary policy is likely to not only limit valuation growth, but also to increase market volatility.

Against this backdrop, much of our viewpoint is shaped by how successful (or unsuccessful) the Fed is in managing tighter monetary policy. We’ll put it front and center that we feel it’s very odd, and perhaps hazardous, to be raising rates right now. Economic growth remains well below long-term averages and inflation is also very low. There just isn’t an obvious need to tap the brakes on the economy.

Fortunately, the U.S. economy remains stable, even if its growth is low. We monitor a wide range of factors including manufacturing activity, sentiment, consumer trends and borrowing, to name a few. For example, the chart on the next page shows the Chicago Fed National Activity Index where readings above zero indicate the economy is growing faster than its long-term trend. The index is a pretty reliable indicator of recessionary periods, which are shaded in grey. We note that recessions tend to emerge when the trend moves below the red line (for more details, please see our 2016 Outlook report). Currently, we are above the recessionary level, but the economy is growing at a pace below trend. Because many other indicators confirm this trend, we don’t foresee a recession at this point.

We believe the primary risks to the economy are a Fed policy error (raising rates too far or too fast) and pockets of weak foreign growth that could ultimately slow the U.S. economy. Both factors appear to have played a role in financial market volatility in early 2016. As the Fed contemplates further rate hikes, we believe it will be important for policymakers to move slowly, perhaps even pausing for a while if economic conditions deteriorate. 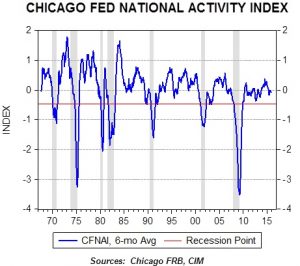 Recessions tend to foster some of the greatest risks for equity investors, which is why we monitor economic conditions so closely. At this point, we don’t foresee a recession. Slow but stable growth in the U.S. economy should create a reasonably good operating environment for many corporations.

Still, there will likely be areas where growth is absent or even negative due to industry conditions. We have ongoing concerns over fundamentals in the energy and materials sectors, which we underweight. Cyclical concerns in financials, healthcare and telecom cause us to be underweight these sectors as well. On the other hand, we are overweight technology, consumer discretionary, consumer staples and utilities, which we believe can provide a combination of specific industry growth and counter-cyclical resilience. Our style bias remains at 60/40 growth/value, based upon our viewpoints for sector exposures.

We remain entirely out of foreign stocks, except for a relatively small allocation for aggressive investors. Although foreign valuations are low, we still favor domestic equities. We believe many foreign developed countries face ongoing weak economic growth, if not recessions. Meanwhile, China continues to adjust to a significantly lower growth rate, which is creating financial market turmoil and is adversely affecting other emerging economies. For these reasons, we remain allocated primarily to domestic equities, with diversified allocations across a variety of capitalization sizes.

Although their returns were generally flat in 2015, bonds played a very helpful role in portfolios. Not only did they provide meaningful stability, bonds also contributed significant diversification. Oftentimes, bond prices rose when equities experienced some of their biggest downdrafts. In this way, bonds delivered a very important aspect of risk control.

Our bond allocations remain focused on intermediate and longer maturities. With the Fed raising short-term rates, many investors have questioned this posture, concerned that tighter Fed policy could potentially cause long-term rates to rise. Our view has been that tighter Fed policy would put the most upward pressure on shorter maturities, which has been the case thus far. In a low growth, low inflation environment, we believe longer maturities can provide attractive opportunities, even as the Fed tightens. For example, if the Fed overtightens and the economy stalls, longer maturity bonds should perform well. On the other hand, if the Fed retreats from tighter policy, the market may consider this to be very accommodating to longer maturities. For these reasons, we maintain our focus on intermediate and longer maturity bonds, including both corporate and Treasury sectors. Speculative grade bonds can be useful where income is a priority, but we have been lowering this allocation for a while and exit the asset class entirely this quarter. Defaults may begin to rise, particularly among energy issuers.

We continue to hold real estate allocations in most portfolios. Real estate fundamentals remain strong, benefiting from low interest rates, high occupancy and strong demand from foreign investors. However, like many other asset classes, real estate valuations have risen in recent years. For this reason, we have been lowering allocations and now utilize a more limited exposure. Still, we believe real estate can benefit portfolios, particularly where income is an objective. We also believe real estate can help to address rising levels of volatility in equity asset classes.

In recent quarters, we have witnessed significant price declines in many commodities, including those related to energy, industrial and precious metals, and grains. Much of the decline reflects lower demand from slower global economic growth, particularly in China. However, prices also reflect excess supply capacity as well. We believe that some prices may be reaching equilibrium levels and may have the potential to recover.  However, at this point we believe the cycle continues to have more downside and we remain out of commodities in all of the portfolios.