Although the equity markets generally had a good fourth quarter to end 2015, the first few weeks of 2016 started off pretty rough. Concerns ranged from global central bank policies (negative interest rates) to declining crude oil prices to the possibility of overly aggressive Fed tightening. The bond market also reflected these concerns and low-risk assets like Treasury bonds rallied. But around the middle of February, markets began to turn. Investors evaluated the broad landscape and determined that their concerns were perhaps overblown. Riskier markets – equities, real estate, high yield bonds and commodities – all rallied, while Treasury bonds retreated.

The precise cause for the February turnaround isn’t exactly clear. We do know that riskier markets rallied even more late in the quarter when the Fed began telegraphing its plan to slow its pace of raising rates. We believe we’ve entered an era where global central bank policies (particularly those of the Fed) are having a heightened impact on virtually all asset classes. Accordingly, understanding the objectives of the Fed has become an important issue in managing investment portfolios.

The Fed raised short-term rates last December and economic data have deteriorated since that time. It is for this reason the Fed decided to take a more gradual path in raising rates. Our central bankers continue to monitor the labor market, which remains uneven, and inflation, which remains low. Employment and inflation have long formed the base of how the Fed directs its policy, but a new third variable, international economic growth, is now being considered by the Fed. Here we take a look at the three variables and what they tell us about the economy and Fed policy.

The first issue – the labor market – appears on the surface to be robust. Unemployment has declined to a level that has historically been a precursor to wage inflation. However, looking at the details reveals a measure of weakness in the labor market. Wages are stagnant and the proportion of people in the workforce remains low. So, while conditions are improving, structural weakness in the labor market will probably limit wage pressure, and this metric will likely encourage the Fed to take its time raising rates.

With regard to the second issue – inflation – there simply does not appear to be any current need for concern. Stagnant wages, falling oil prices and widespread global trade are together keeping prices low. Furthermore, expectations of future inflation are declining. In the chart on the next page, we show one of the Fed’s favorite measures of inflation. It reflects inflation for consumer goods and services, stripping out the impact of volatile food and energy prices. We can see that inflation has been low for several years and we expect this trend to continue, which should also encourage the Fed to not hurry in raising rates. It’s worth noting that in an election year where many anti-trade policies are being showcased, our inflation outlook could change if we perceive protectionist policies are likely. 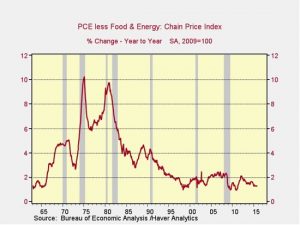 The third issue – international growth – is somewhat new for the Fed. Historically, the Fed has viewed international growth as an outside factor, one that hadn’t ever really threatened U.S. growth. However, it appears the Fed now believes that high levels of global trade and weak foreign economies can impede U.S. growth. As such, we believe the Fed may pay closer attention to currency exchanges, recognizing that if the U.S. dollar becomes too strong then spending on foreign goods and services may rise and create a drag on the U.S. economy.

We believe these three factors have enabled the Fed to take a more gradual path in raising rates. Accordingly, we believe the likelihood of a policy error that could cause a recession has declined. We anticipate U.S. economic growth, inflation and interest rates are likely to remain low.

Following the recession of 2008, the stock market has delivered returns higher than the growth of the broad economy and corporate earnings. Part of this trend was due to the very low valuation levels that equities reached during the recession. As valuations recovered, returns were higher than normal. In addition, we believe the Fed’s quantitative easing monetary policy helped drive valuations even higher. We believe this combination is why stock returns were above average even as economic growth was below average.

Because we expect below-average economic growth to continue, earnings growth may also be somewhat muted. With valuations already a bit higher than average, we don’t expect valuations to rise significantly. Against this backdrop, it’s likely that equity returns will be lower going forward. This doesn’t imply a negative view toward equities; however, we believe investors should temper their return expectations. Fortunately, it’s also likely that volatility will remain lower than normal due to the large amounts of liquidity central banks are providing to global financial systems.

We continue to emphasize small and mid caps, which may have higher return potential than large caps, albeit with higher risk, as many small and mid cap companies have higher growth rates. Still, large caps are additive, particularly for growth investors with a lower risk tolerance. We also continue to avoid foreign allocations in most portfolios as we believe U.S. growth and domestic equities offer more favorable return/risk profiles.  Within our large cap allocations, we overweight the technology, consumer discretionary and utilities sectors, while underweighting financials, health care, materials and telecom. Our growth/value bias remains in favor of growth (60/40).

As equity markets declined during the first quarter, our bond allocations provided the diversification we were seeking. Bond prices rose as equities declined, which was helpful in mitigating overall portfolio risk. Additionally, although the Fed hiked rates in December, it has since indicated a more gradual approach to raising rates. Given our expectations for a low growth, low inflation environment, intermediate and long maturity bonds still offer constructive return/risk profiles.

Our intermediate and longer maturity allocations include both corporates and Treasuries. We remain out of speculative grade bonds as energy sector defaults remain a concern.

Real estate continues to have an attractive profile, offering potential income, capital appreciation and diversification. Additionally, we expect the underlying fundamentals to remain strong, with steady or improving rental and occupancy trends. Valuations are likely to be supported as foreign capital continues to flow into the asset class.