If you look at how stocks and other risk assets have lost value since Fed Chair Powell’s short, hawkish speech at Jackson Hole last month, it’s clear he has succeeded in resetting expectations for monetary policy.  Investors now seem to accept that the Fed plans to hike interest rates much higher and then hold them there until consumer price inflation falls sharply.  The drop in risk assets suggests investors now realize that monetary policymakers are willing to push the economy into recession if needed to re-establish their credentials as inflation fighters.  That’s a huge change in sentiment.  But has the change gone far enough?  Multiple signs suggest investors expect any impending recession to be mild.  For example, the S&P 500 price index is currently down just 19.2% from its most recent record high in early January versus a median decline of approximately 25% during recessions over the last few decades. 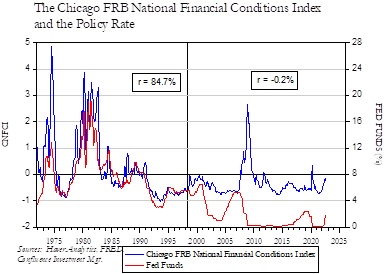 It’s hard to pinpoint exactly why the Fed’s interest rate policy lost its impact on financial conditions in the late 1990s, but one plausible explanation is that the U.S. economy by then had become “money market driven” and was no longer “bank driven.”  By the late 1990s and ever since, those in need of capital and those holding excess capital (including international entities) have increasingly found each other via efficient, impersonal trading markets.  Rather than borrowing from banks, sophisticated corporate or municipal borrowers now issue bonds directly to investors.  Individuals borrow from both banks and specialized mortgage companies, both of which often package those loans into securities and sell them to third-party investors.  Finally, any holder of high-quality assets like U.S. Treasury bills can pledge them in return for a loan via the “repo” market.  The capital flows involved in these market transactions amount to trillions of dollars, and neither the banks nor the Fed has much control over them.

The problem is that Chair Powell and the other Fed policymakers may not understand or accept that in this new, internationalized money market-driven environment, the Fed may be better positioned to manage the economy by setting guardrails on the value of market-traded financial instruments like bonds and repos.  The fed funds rate may no longer be the right tool to achieve the Fed’s goals of stable consumer prices and full employment.  In fact, the Fed’s current aggressive rate hikes implicitly show this.  In the chart below, we can see that the Fed’s current rate hikes have broken a 20-year tradition in which policymakers cut rates or refrained from hiking them when the VIX gauge of stock volatility was greater than 20.  The Fed is now hiking rates despite the VIX being well above 20, just as it did in its bubble-popping mode during the late 1990s. 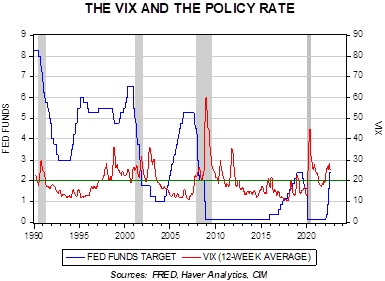 We all know how dangerous it is to try slicing an apple with a dull knife: you add more and more pressure until, suddenly, the blade crashes through and takes off the tip of your thumb.  The fed funds rate is now a very dull knife, and Fed policymakers will likely have to press it much harder than people expect before it substantially tightens financial conditions and cuts inflation pressure.  The danger is that the accumulation of rate hikes will suddenly gain traction and slide through the economy.  Looking forward, the Fed may realize that a better policy tool now may be something like its emergency asset backstopping programs early in the coronavirus pandemic.  With those programs, the Fed promised to buy a wide range of assets ranging from Treasuries and commercial paper to municipal bonds, if needed, to ensure their tradability, but the programs were so successful in calming the markets that they were little used.  For the time being, however, Fed policymakers are still wedded to their old-school, dull-bladed fed funds rate and will likely keep ratcheting it up until it finally sparks a more substantial recession.