Gold prices have been weak in recent months despite high levels of inflation.  Gold is often considered an inflation hedge, and so the lack of strength is puzzling to many investors.  In this report, we will take a look at gold and try to explain why prices have failed to rally in the face of rising inflation.

We start our analysis of gold by using our basic price model, which uses the balance sheets of the Federal Reserve and the European Central Bank, the EUR/USD exchange rate, the real two-year Treasury yield, and the fiscal deficit.  We also have a variation that adds bitcoin. 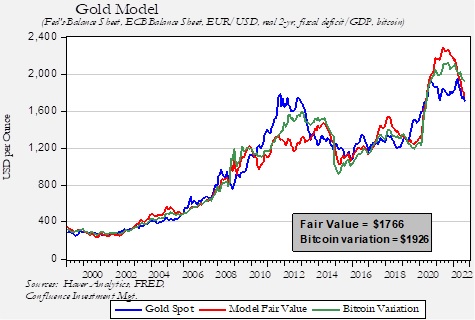 Spot gold prices have underperformed the model for the past couple of years, but in the most recent update, the standard model’s fair-value estimation has declined to near current prices.  That would suggest the market was anticipating a weakening of positive fundamental factors.  As the Federal Reserve contracts its balance sheet and real two-year yields rise, along with dollar strength, we would expect additional weakness.

But, what about the inflation issue?  Isn’t gold an inflation hedge?  Not really.  It’s more of a currency debasement hedge.  In classical economics, inflation and currency debasement were essentially the same thing.  The classical model assumed full employment of resources (due to flexible prices and wages) and stable velocity; thus, the only source of inflation was excessive money supply.  However, the model was flawed.  Not only do prices and wages lack flexibility, which means that unemployed resources can exist, but velocity is far from stable.  Thus, even with a stable money supply, inflation can occur if velocity rises or if supply shortages develop.

Instead, the better way to think about gold is that it is money independent of government and debt.  Most currency we use is backed by a liability; for example, the “money” used by deploying a credit card is money created by a bank liability.  Determining currency debasement is difficult.  If the money supply is rising due to increased bank lending, for instance, is that debasement or a reflection of investment demand?  Accordingly, the markets tend to rely on exchange rates to ascertain debasement.  This isn’t a perfect solution,[1] but it has the benefit of clarity.  The impact of the dollar on gold is apparent in the below chart. 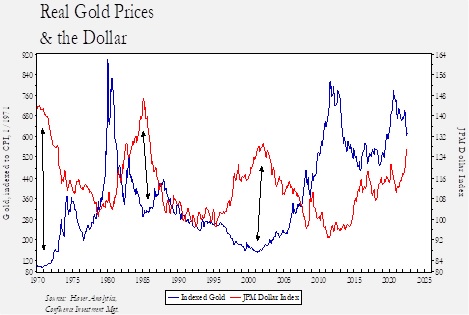 In this chart, we deflate gold prices by CPI and index that level to January 1970.  We then compare that to the JP Morgan dollar index, which adjusts the dollar based on relative trade and inflation.  Periods of strength in gold tend to coincide with periods of dollar weakness.  Note that in the 1970s, when gold developed its inflation-hedge reputation, the dollar weakened notably.  The rising dollar in the Volcker years led to weaker gold prices as did the period of dollar strength from 1998 into 2022.  In fact, one could argue that gold is holding up rather well in the face of dollar strength; during previous periods, when the dollar index was this elevated, gold traded much lower.  The reason gold is doing relatively well is likely due to factors discussed in the first chart.  Expanded central bank balance sheets and negative real interest rates have supported gold, but a bull market in gold will likely require dollar weakness.

[1] If all central banks are running expansive monetary policies, then exchange rates reflect relative, as opposed to absolute, debasement.