Our starting point for examining bond yields begins with our yield model.  The key components are fed funds, the 15-year average of CPI (which is a proxy for inflation expectations), the five-year rolling standard deviation of CPI (a measure of inflation volatility), German Bund yields, oil prices, the yen/dollar exchange rate, and the fiscal balance scaled to GDP.  Based on this model, the current yield on the 10-year T-note is well below fair value.

Although yields have increased, as the deviation line shows, they are still well below the model estimate.  Interestingly enough, it is not unusual for the deviation to be below the model estimate as the economy approaches recession.  This condition reflects the flattening and inversion of the yield curve.  As monetary policy is tightened, the markets begin to expect slower economic growth which in turn depresses long-duration yields.  However, the current deviation is wider than normal, which suggests that a backup in yields is still likely.  A yield of 4.10% would be in line with the lower standard error range.

Long-duration Treasury yields may be on track for consistently higher yields in the future.  Since peaking in the early 1980s, the 10-year T-note has been steadily declining.  Persistently low inflation has supported that downtrend.  However, market action suggests that we may be at the turn in yields which, if true, could create a secular bear market in bonds. 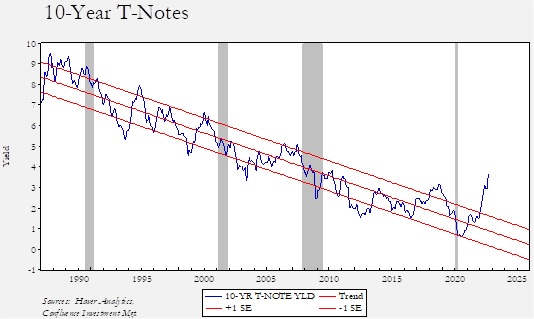 Since the late 1980s, the downtrend has been steady and mostly captured by a trendline flanked by a plus/minus of one standard error from a regression model.  That downtrend was definitively broken in March.

Why is the trend changing?  Most likely because investors fear that the inflation regime which fostered the downtrend is coming to an end.  Increasing political tensions, a breakdown in the globalization regime, and uncertainty about policymakers’ willingness to maintain low inflation are all conspiring to affect inflation expectations.  We would expect the yield to decline in a recession.  If the trend has truly changed, the low will likely be set above the upper line.  If that occurs, a long period of steadily rising yields becomes more likely.