The U.S. Dollar Index hit a 20-year high in September as the greenback gained against other global currencies. The climb in the U.S. dollar (USD) began in the post-pandemic recovery. Investors flocked to the greenback for safety as the U.S. economy outgrew its peers in the OECD. Aggressive policy tightening by the Federal Reserve accelerated the appreciation as U.S. dollar-denominated assets have become even more attractive for foreign investors. The strong pick-up in demand for the USD intensified inflationary pressures globally and could push other countries into recession. 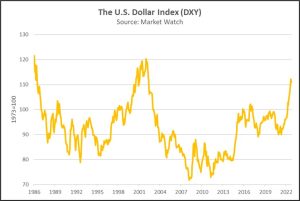 With limited options, central banks and governments were forced to take extreme actions to prevent their currencies from depreciating. Throughout 2022, investors have penalized countries that failed to prioritize fiscal and monetary austerity to contain inflation. Examples include a controversial tax plan in the U.K., the European Central Bank’s stealth quantitative easing to maintain sovereign spreads within the eurozone, and Japan’s insistence on yield-curve control, which led to nosedives in those countries’ respective currencies. The resulting depreciation has made dollar-denominated imports more expensive, adding to price pressures. As a result, inflation rose to an all-time high in the eurozone and to multi-decade highs in Japan and the U.K.

The exchange rate volatility reflects the limitations of central banks and governments when conducting monetary and fiscal policy. Typically, policymakers have three options with macroeconomic policy: fixed exchange rates, sovereign central bank policy, or open capital markets. It is impossible to do all three simultaneously as it creates a phenomenon known as the impossible trinity, or the policy trilemma. In other words, policymakers can opt for a fixed exchange rate only by either giving up monetary sovereignty or restricting capital flows.[1]  Post-Bretton Woods, most developed economies chose to solve the predicament by opting for floating exchange rates. This choice allowed policymakers to have open capital markets and monetary sovereignty.

The problem with the post-Bretton Woods arrangement is that exchange rate levels affect macroeconomic policy goals. For example, a weak exchange rate can be inflationary, while a strong exchange rate can act as unwelcome policy tightening. Thus, extreme moves in exchange rate levels may become counterproductive to policy goals and may require a response to change the trend in an exchange rate. Unfortunately for policymakers, this is where the impossible trinity becomes a problem. During currency crises, emerging nations are notorious for implementing capital controls. However, developed economy policymakers have generally shied away from such controls, and this reluctance leaves them with only one policy option: they must cede sovereignty. For instance, the Bank of England, the Bank of Canada, and the European Central Bank have all accelerated their respective paces of rate hikes to keep up with the Federal Reserve. As a result, the decision to raise rates in line with the Federal Reserve has calmed the nerves of investors while simultaneously hurting economic growth.

Although the impossible trinity does describe the problem facing policymakers in a single country, there are multinational solutions to resolve the issue. The 1985 Plaza Accord, the 1987 Louvre Accord, and the 1995 Halifax Accord are all examples of international cooperation to address exchange rate divergences. The Plaza Accord was an agreement to address dollar strength. European and Japanese policymakers were reluctant to follow Federal Reserve policy rates as the Fed was addressing a serious inflation problem, while the other central banks were not facing the same issue.[2] However, the Fed’s monetary policy led to capital inflows and the rapid appreciation of the dollar. By the mid-1980s, the dollar’s strength was making U.S. manufacturing uncompetitive and was lifting foreign inflation. And so, in September 1985, the G-5 nations agreed to a coordinated policy response to weaken the dollar. In addition to direct intervention to weaken the dollar, the Fed cut policy rates as the other countries’ central banks raised policy rates. The dollar then reversed its trend.

One could argue that the trilemma was not really resolved but simply managed during these accords. In the Louvre Accord, for example, the policy actions of the Plaza Accord were reversed to halt the dollar’s depreciation. In a sense, policymakers agreed to a certain policy direction and worked in concert to achieve a particular goal, which was a change in the trend in exchange rates. Strictly speaking, all the central banks sacrificed sovereignty to resolve an exchange rate issue.

Policymakers, therefore, resolved the trilemma by allowing exchange rates to float within unspecified boundaries. When those boundaries are hit, central bankers are forced to give up monetary sovereignty until the exchange rates adjust to acceptable levels. The question facing markets now is if there is consensus among developed-market policymakers that the USD is too strong. So far, that consensus hasn’t emerged, but it is clear that Japanese authorities are not happy with the yen’s exchange rate but are continuing to maintain monetary sovereignty through selective intervention. History suggests such unilateral actions slow the “direction of travel” but don’t reverse the trend. If the Europeans are unhappy with the euro rate, they haven’t yet made it public. And, with U.S. policymakers mostly concerned with inflation reduction, there is little incentive to pressure the FOMC to cut rates.

That doesn’t mean there isn’t collateral damage coming from the exchange rate markets. The USD’s rise slashed an estimated $10 billion from corporate earnings for Q3 2022. Much of this pain was concentrated on U.S. firms with foreign revenue exposure, specifically in the tech sector. But so far, weakness in the tech sector has not been enough of an issue to support a policy change. Until U.S. policymakers think they have inflation under control, foreign policymakers  have to choose whether to allow their exchange rates to weaken further or adopt the monetary policy of the Federal Reserve. Given the persistence of U.S. inflation, dollar strength is likely to continue.

[1] Bretton Woods, which was a system of fixed exchange rates, solved the problem through restricting capital flows.