The Conference Board Survey of Consumer Confidence and the University of Michigan Survey of Consumer Sentiment are two closely followed reports about the American consumer. Domestic consumption makes up about two-thirds of the U.S. economy, so insights into consumer attitudes may predict changes in the business cycle. The latest reports from the Michigan Survey and the Conference Board showed the surveys have started to diverge in recent months. In this report, we discuss why this discrepancy exists and what these surveys tell us about the economy. 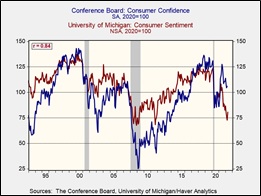 As the chart above shows, the University of Michigan Survey has fallen much faster than the Conference Board report.  The divergence between the surveys is driven by differing views regarding how consumers view the current state of the economy. Over time, the two surveys have tended to move in tandem; thus, the recent divergence is interesting. Although it isn’t clear why these differences exist, we suspect they may be related to the questions asked in each survey. The Conference Board survey focuses on broad questions regarding business conditions and employment, while the Michigan Survey focuses on a wider variety of issues ranging from inflation and the current state of the economy to spending habits and investment performance. Consequently, the optimism in the Conference Board survey may reflect consumer views of the labor market, and the pessimism of the University of Michigan survey may pick up inflation-related issues.

Both surveys have a current situation component and a future expectations component.  Despite the differences in the short-term outlooks, both surveys indicate consumers are becoming increasingly jaded about the future of the economy. We suspect that the decline in economic outlook has been driven largely by inflation concerns. Over the last few months, rising inflation has led consumers to change their budgetary habits and, in some cases, reduce their real consumption. When adjusting for inflation, retail sales in March fell, on an annual basis, for the first time since June 2020.  Although it is tempting to argue that a decline in consumer outlook may lead to a decrease in overall consumption, our research suggests there doesn’t seem to be a strong relationship between the two variables; the March report could be an outlier. That being said, we have found that consumer expectations provide insight into whether young adults, people under age 40, decide to take out a loan to purchase a home. Our model suggests that consumer expectations and single-family housing starts explain about 70% of the variation in the annual change in home mortgages for these young adults. The model predicts that as consumer expectations fade, young adults will probably be more reluctant to take out loans to purchase homes. Assuming our model is correct, the rise in home prices could slow by the end of the year. 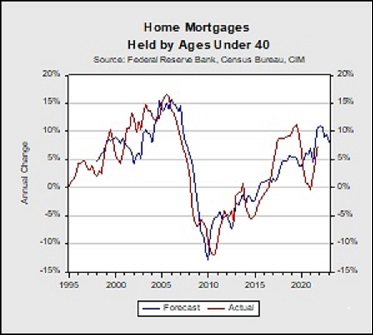