Since the beginning of the year, commodities, as measured by the Bloomberg Commodity Index, have been up 15.4%.  All other major asset classes are down for the year.  Among the S&P 500 sectors, only energy is positive.  Commodity prices were strong going into the war in Ukraine, but the incursion coupled with the subsequent sanctions have triggered a historic rally.  In this report, we put this rally in context and examine if it will continue. 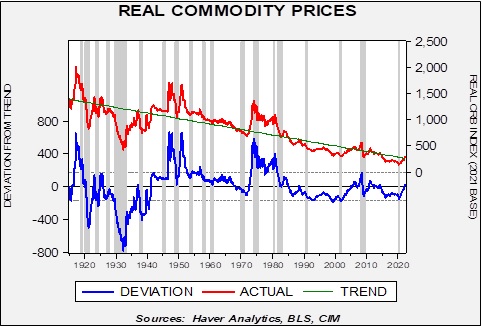 In this chart, we deflate the CRB Index, starting in 1915, and regress the real index against a time trend.  The fact the green line declines over time shows why it is hard to be a commodity producer.  Over time, commodity prices adjusted for inflation tend to decline.  Market economies tend to use less “stuff” when making goods and services, meaning that the final product that a commodity producer makes doesn’t keep up with inflation.  However, as the deviation line on the chart shows, there are periods where commodity prices move well above trend.  The three spikes above-trend that occurred before 1970 were caused by war—WWI, WWII, and Korea.  The WWII spike was delayed until after the end of the war because of rationing and price controls.  The spike that lasted from 1973 to 1981 was partly due to the Vietnam War but was mostly a result of the monetary uncertainty triggered by Nixon’s decision to leave the Bretton Woods Agreement.  That bull market ended with the combination of the Reagan/Thatcher deregulation[1] and the Volcker’s interest rate shock in the early 1980s.  Since then, we have not had a major commodity bull market.  The one observed from 2000 to 2007 can be seen on the chart, but compared to earlier events, it was rather modest.

The above chart raises two questions.  First, will the war in Ukraine have an effect comparable to other major conflicts?  Second, if a commodity bull market is in the offing, will it look similar to those before 1981 or the one in 2000-07?  Let’s tackle the first question.  On its face, it seems unlikely that the war in Ukraine will become a resource-heavy industrialized conflict.  Although Moscow likely has designs on further expansion, an attack on a NATO nation could escalate to a superpower confrontation.  Thus, we expect Russia to use some degree of discretion before even considering expansion

However, even without a major mobilization similar to those of the pre-1980 wars, the impact on commodities could be similar.  There are two reasons.  First, Russia is a substantial commodity supplier, and the sanctions levied on Moscow have already disrupted commodity flows.  Without a quick resolution to the Ukraine War, these will likely stay in place indefinitely, and the longer they are in effect, the more consumers will adjust to higher prices.  Second, and even more concerning, are the financial sanctions effectively rendering most of Russia’s foreign reserves worthless.  Reserve managers worldwide must now account for the fact that if their nation becomes a target of the U.S., they could see similar treatment.  Thus, what assets are now reserve assets?  Again, as long as a nation has good relations with the U.S., it is probably safe to hold dollars and Treasuries.  But, if there is any chance of soured relations, the question of viable reserve assets becomes critical.  Russia found that euro assets proved to have the same problem as dollar assets, and even moving gold in quantity is difficult under sanction.  Reserve managers may conclude that the only assets that may have value in a crisis are commodities.  In other words, it would not surprise us to see nations start expanding stockpiles of commodities that would act as a buffer in a sanction crisis.

The answer to the second question probably rests on the behavior of central banks.  Part of the reason we saw commodity price spikes after WWII and during the Korean War was that the Federal Reserve was not independent.  During WWII, the Fed was forced to fix interest rates across the entire Treasury yield curve.  It led to a massive expansion of the Fed’s balance sheet. 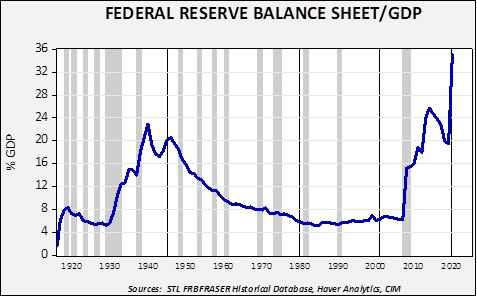 Into WWII, the balance sheet rose to 22.9% of GDP and remained elevated into the early 1950s.  However, after the Fed’s independence in 1951, it gradually declined to around 6% of GDP…until the Great Financial Crisis.  The bouts of quantitative easing that occurred in the last decade led to a steady expansion of the balance sheet until quantitative tightening began in 2018.  That policy was abandoned in 2019 due to financial stress, and then quantitative easing resumed in earnest during the pandemic.  One could argue that the Federal Reserve accommodated the rise in commodity prices through its balance sheet practices in the 1940s into the early 1950s.  Given the vast expansion of the balance sheet since 2009, it is arguable that there is ample liquidity to accommodate another commodity bull market.

The chart on the left shows the CRB Index, log-transformed, regressed against the level of nominal GDP.  Note that since around 2014, when oil prices fell, the CRB has been trading well below GDP.  In fact, the commodity market since 2014, relative to GDP, looks familiar to the 1930s commodity bear market.  A rally to fair value would put the CRB Index at 323.09 (from the current 295.41) and to a standard error above fair value; with the usual definition of a commodity bull market, the level would be 428.98.  However, the chart on the right suggests that a primary component to a major commodity bull market will be a weaker dollar.  So far, the dollar has been mostly rangebound, although the greenback has benefited recently from flight to safety flows triggered by the war.

In conclusion, even with the strong rally seen recently in commodities, market conditions and geopolitical factors suggest further upside is probable.  Yet, the next substantial “leg” higher in commodities will likely require a weaker dollar.  If reserve managers begin to shun the dollar, a decline in the greenback is certainly possible.

[1] To be historically accurate, deregulation began under President Carter, but that policy is mostly tied to President Reagan.