The U.S. economy and government economic policies have many moving parts, but investors often latch onto just one or two indicators or policy initiatives to gauge where asset prices are heading.  These days, their focus has been on consumer price inflation and the Federal Reserve’s plan to hike its benchmark short-term interest rate to combat it.  Tighter monetary policy should help cut demand, leading to lower inflation, but it will also have a direct negative impact on asset prices.  In this report, we argue investors aren’t paying enough attention to another aspect of economic policy.  Investors might not realize it, but federal fiscal policy is also tightening, which will further weigh on economic growth.  It will be an additional challenge for asset prices.

Investors are often incensed at the enormous numbers that get bandied about when talking about government spending, but it’s important to keep in mind that the overall economy is also enormous.  U.S. gross domestic product (GDP) totaled about $23 trillion in 2021.  In the decade leading up to the coronavirus pandemic, total federal receipts averaged 16.3% of GDP, while federal spending averaged 21.6% of GDP.  The budget deficit averaged 5.3% of GDP.  However, to cushion the blow of the pandemic starting in early 2020, the government passed trillions of dollars of emergency spending, ranging from forgivable loans for affected businesses to enhanced unemployment benefits and cash grants for individuals.  As shown in the chart, total federal outlays in the year ended March 2021 were up a massive 65.7% from the prior year, even as federal receipts were essentially flat. 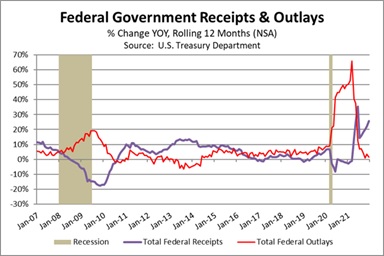 The added spending during the pandemic undoubtedly helped preserve economic activity.  It also blew out the budget deficit and, against a backdrop of pandemic supply disruptions, has contributed to today’s high inflation as well.  However, the chart above shows that this fiscal stimulus has already gone into reverse.  In the year ended December 2021, spending was essentially unchanged from the previous year.  Because of the rapid economic recovery, government receipts (mostly income taxes) were up 25.7%.  Flat spending against a huge jump in tax income helped cut the budget deficit to “just” $2.577 trillion in 2021, or $771.4 billion narrower than in 2020.  The deficit in 2021 was only about 11.4% of GDP, roughly half what it was in 2020.

The $771.4 billion in deficit reduction during 2021 was a drag on the economy, but it wasn’t very noticeable because companies and individuals had so much pent-up demand.  In addition, companies and individuals still had a lot of excess cash and savings left over from the stimulus programs earlier in the pandemic.  The experience in 2022 could be very different.  For one thing, forecasts from authorities such as the White House Office of Management and Budget and the Congressional Budget Office suggest the deficit will fall dramatically again this year.  In dollar terms, the deficit is expected to narrow by some $1.3 trillion, mostly because of higher income tax receipts and reduced transfer payments to states, local governments, and individuals.  That’s exactly like taking $1.3 trillion out of the economy, just as many firms and individuals start to deplete their savings and face much higher price inflation. 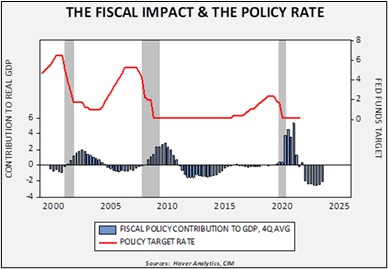 As shown in this chart, the fiscal tightening that began in 2021 has been shaving more than two percentage points off the annualized U.S. growth rate for the last several quarters.  Taking another $1.3 trillion in net federal spending out of the economy in 2022 will cut several additional percentage points out of the growth rate, on top of the other headwinds to demand.  This fiscal drag will be offset partially by factors such as the Biden administration’s new infrastructure spending and reduced demand for imports.  Nevertheless, we still expect it to have a major impact in slowing demand, just as the Fed looks set to impose multiple interest-rate hikes.  The chart shows that the Fed’s recent rate-hiking campaigns have all occurred during periods of negative fiscal impacts, but none of those periods had fiscal tightening on the scale we’re about to see.  This simultaneous tightening of fiscal and monetary policy may help ease inflation pressures.  It also means real economic growth in 2022 may be a little better than the anemic rates seen in the decade before the pandemic.  That will likely limit the upside for equities and commodities this year.  At the same time, it should also limit the downside for bond prices and keep yields from rising as much as some investors now fear.