Our expectation of no policy rate hikes this year is an out-of-consensus call in our 2022 Outlook: The Year of Fat Tails.  There are a couple of factors that suggest rate hikes this year.  First, financial markets have factored in rate hikes.  Fed funds futures suggest a greater than 50% likelihood of a rate hike beginning with the March 2022 meeting and have discounted the same likelihood for four 25 bps rate hikes by December.   Second, the Mankiw Rule, a derivation of the Taylor Rule, indicates the FOMC is hopelessly behind the curve in terms of rate hikes. 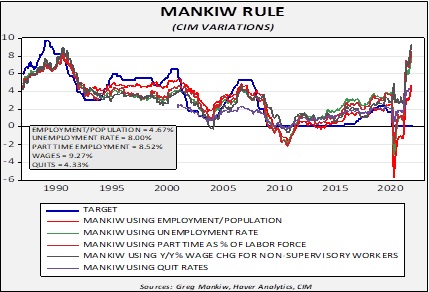 We have created five variations of the Mankiw rule, which calculates a fair value policy rate from core CPI and various measures of the labor market.  The most conservative measure puts the recommended fed funds rate at 4.33%; the most radical is 9.27%.

So, given this strong evidence, what is the argument for steady policy?    Part of the reason the Mankiw variations are so high is due to elevated inflation.  Base effects alone should lead to lower readings on inflation by mid-year, which should cool the impetus for policy tightening.  Although the labor markets show signs of being tight, the labor force remains well below pre-pandemic levels.  It may give FOMC members pause, worried that tightening could be premature. 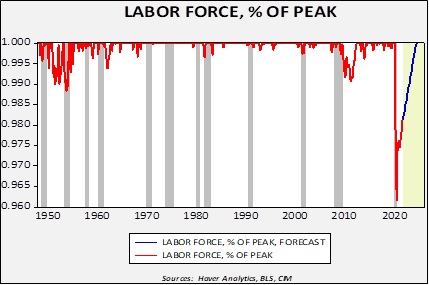 This chart compares the three-month average of the labor force relative to its most recent peak.  The drop in the labor force seen during the pandemic was unprecedented in the post-war era.  It is uncertain whether the labor market has been permanently impaired by the pandemic.  It may never return to pre-pandemic levels.  It is also possible that as the pandemic steadily shifts to endemic, workers will return.  Thus, tightening could prematurely put this return at risk. 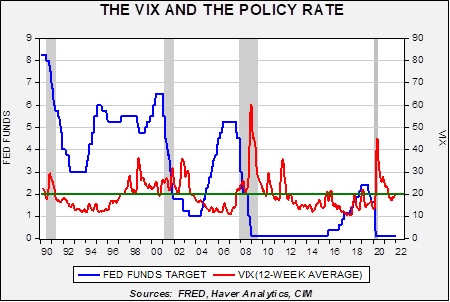 One clear measure of financial stress is the VIX, which measures the implied volatility of the S&P 500.  In general, the FOMC tends to avoid tightening when the 12-week average of the VIX is above 20.  For example, after the Fed raised rates in late 2015, policy remained on hold until the VIX fell decidedly.  With the VIX currently holding around 20, we expect the FOMC to delay any moves to raise rates until market volatility eases.

Finally, we suspect financial markets are underappreciating the degree of fiscal tightening that will occur this year. 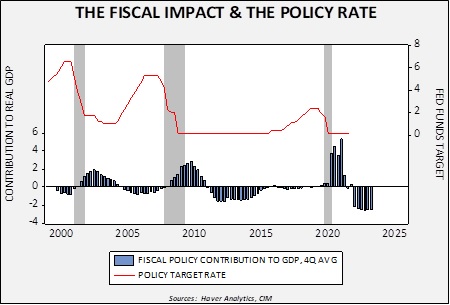 Fiscal spending during the pandemic was extraordinary.  However, as that support winds down, it will act as a drag on economic growth.  If the FOMC tightens into this austerity, economic growth could weaken more than expected.  The consensus real GDP growth for 2022 is 3.9%.  That could be at risk if the Fed tightens into falling fiscal support.

Obviously, we could be wrong on our monetary policy call, and if we are, we will adjust.  For now, we think there is a case that the market is overestimating the degree of monetary policy tightening that will occur.  If we are correct, it’s likely supportive for equities, short-duration fixed income, commodities, and bearish for the dollar.