As we’ve previously described in many of our publications, the Russian invasion of Ukraine has changed the world in profound, long-lasting ways.  We have defined how it will further cleave the world’s nations into at least two major geopolitical blocs with limited commercial and financial ties.  We have explained how governments and companies will now favor short, secure supply chains, even if they’re less efficient and more costly than the global supply chains of the last three decades.  In this article, we focus on what is likely to be a persistent change in world financial markets.  Specifically, the Latin American stocks that have often underperformed in recent years show signs of being much better performers in the new era.

Stock market returns in the less-developed “emerging markets” have often failed to keep up with the U.S. and other developed markets in recent years, but Latin America has fared especially poorly.  While the broad MSCI Emerging Market Index provided a total return of 34.3% in the five years to late March (illustrated by the solid black line in the chart below), the MSCI Emerging Markets Latin America Index (the dashed orange line) returned just 19.4%.  The chart also shows the stock indexes for Brazil, Chile, Peru, and Colombia.  These countries are popular with U.S. investors and are considered highly investible, but they all lagged the broad emerging markets index for much of the last five years.  The recent poor returns for Latin American stocks can be traced to a range of factors, such as political and governance issues, slow economic growth compared with the commodity boom years of the early 2000s, and the impact of the coronavirus pandemic. 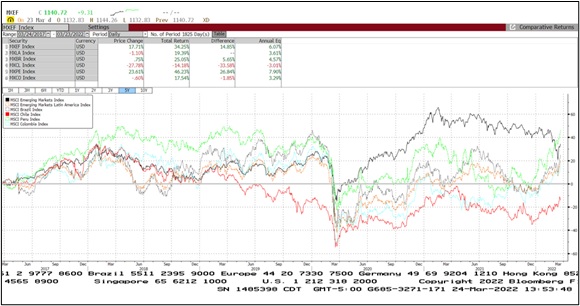 Even a cursory look at these indexes over the last few months suggests something fundamental has changed.  As shown in the following chart, the overall emerging markets index lost more than 7% in the first three months of 2022, reflecting, in part, the steep declines in Chinese and Russian stock values.  In contrast, the Latin America index provided a positive total return of almost 23%.  Some Latin American markets, such as Mexico, have changed little, but our four highlighted markets outperformed.  Peru’s market returned nearly 40%, and Brazil’s market returned almost 30%.  The strong performance in these markets is especially notable because all face elections or other political events that could push economic policy leftward, which would ordinarily be a major headwind for stocks. 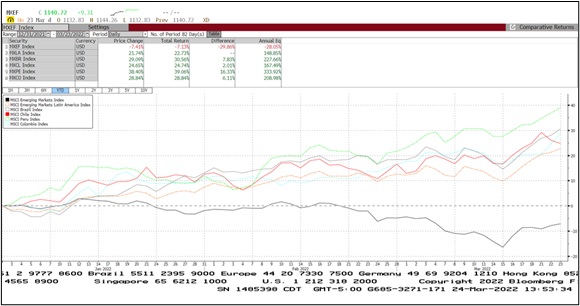 What’s behind the big gains for these Latin American markets?  Our analysis indicates that each of these markets is highly correlated to global prices for oil and other commodities, while China, Russia, and the many emerging markets closely tied to them are correlated negatively with oil and other commodities.  Even though these Latin American countries sell a lot of oil, commodities, or other goods to the Chinese and Russian blocs, we suspect investors appreciate their relative geopolitical independence and the fact that they may be in a good position to strengthen their future trade ties with the U.S.-led bloc centered on North America and Western Europe.  In any case, these Latin American stock markets are well-positioned to benefit from the skyrocketing commodity prices touched off by the Russia-Ukraine war.

We think the Latin American stock resurgence could persist.  Even before the war, loose monetary and fiscal policies in the U.S. and other developed countries were pushing up prices, especially in the context of supply disruptions brought on by the coronavirus pandemic.  Monetary and fiscal policies are now being tightened in many countries, which should help reduce demand, but the war is causing severe new supply disruptions in commodities such as oil, wheat, and fertilizers.  The supply disruptions are even prompting hoarding behavior, from companies boosting their raw material inventories to countries imposing export bans on key commodities.  Such hoarding can spark a persistent upward spiral in prices, even while drought discourages crop planting in some regions.  Finally, the Western countries’ financial sanctions on Russia are likely to prompt some countries to shift their foreign reserves from Western currencies to purchase physical commodities.  Of course, a major escalation of the war or a global recession sparked by high inflation or tighter policy could eventually bring commodity prices down again, dragging Latin American stocks with them.  For now, however, we think both commodity prices and Latin American stocks have room to rise further.