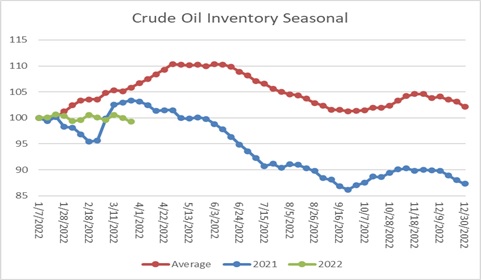 This chart shows the seasonal pattern for crude oil inventories.  Last year, oil stocks peaked in early April and fell steadily into September.  This year’s pattern hints that we may have already peaked stockpiles, meaning commercial inventories may decline for the next several months. Even though the current oil price far exceeds the level that the inventory model below would indicate, the divergence may narrow in the coming weeks if we see continued seasonal declines in oil stocks.

Clearly the relationship between the EUR and oil prices has fallen apart.  Just using the oil inventory model, the current fair value is $71.80.  To justify the current monthly average of around $180 per barrel, commercial inventories would need to decline to 387 mb.  Is that conceivable?  Yes.  If we see stockpiles decline in a similar fashion to last year, by mid-September, commercial inventories will be around 375 mb.  So, at present, the current price has discounted further tightening in supply, but based on last year’s inventory behavior, the current price isn’t unreasonable. 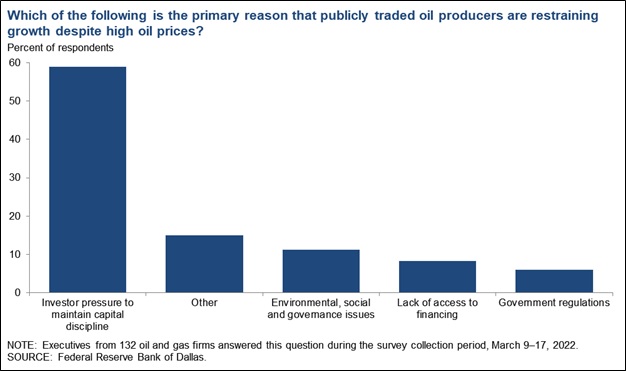 Although government regulation does play a role, as does ESG, their investors’ demand for returns is restraining growth.  The oil and gas industry has traditionally experienced booms and busts; it appears financial firms are trying to contain that cycle.  The shift to encourage expanded oil and gas production is boosting the shares of energy companies.  It should also be noted that the survey suggests oil and gas executives do not see a promising future, which is also likely curtailing investment.