Given the remarkable events of the past week, we are adjusting the usual format of this report.  We[1] have been covering energy for over three decades and never imagined that we would see prices for actively traded futures fall into negative territory.

The sharp drop in prices was mostly due to forced selling by exchange-traded products (ETPs).[2]  As a reminder, there are no grantor trusts in oil, which would require the trust to hold actual barrels of oil; instead, oil ETPs usually create their products in the futures markets.  Although there are various methodologies in operation, they all work, to a greater or lesser degree, by rolling contracts in different oil futures months.  The most commonly used ETPs normally operate by holding the front month contract and, at some point near expiration, “rolling” into the next month.  This gives an approximate constant long position in crude oil.  The total return on these products come from three sources—the price of oil itself, the interest on margin,[3] and the “roll yield.”  If the calendar curve for oil prices is backward (that is, the nearby futures trade at a premium to the deferred contracts), there is a positive roll yield.  At each roll, under these conditions, the ETP will be purchasing a cheaper contract.  If nothing changes, the cheaper contract will rise in value and benefit the ETP holder.  The opposite condition, where the nearby futures trade at a discount to the deferred futures contracts, is known as contango.  That is the current situation in the oil market.  In this case, there would be a negative roll yield.  Contango usually occurs when there is too much prompt supply relative to demand.

There have been reports of strong inflows into oil ETPs.  Although we don’t have a breakdown by commodity, there has been a clear surge in flows.  The chart below shows ETF net issuance for commodity ETPs on a weekly basis.  The recent surge is notable and market commentary would suggest the lion’s share of these flows were likely into oil ETPs. 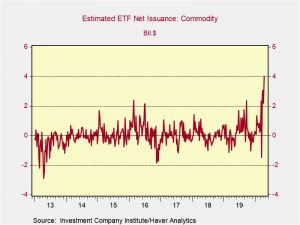 It is likely that retail investors viewed low oil prices as unsustainable and wanted to establish continual long positions for the eventual turn in prices.  If not for the roll yield, this would be a reasonable strategy.  But the roll yield under conditions of contango increases the cost of holding the position.

As the ETPs began the roll process, where they sold their long positions in the nearby futures and bought the next deferred contract, there was a large long position that needed to be liquidated.  Unfortunately, there was little place to put the oil as the ETP doesn’t take delivery of the commodity.  As of April 10, nearly 70% of storage at the Cushing, OK, delivery hub for the CME crude oil contract was utilized; it is likely that much of the rest of it was already leased.  The ETPs were forced to sell to buyers that required the long to “pay” them for taking the oil off their hands, leading to the historic negative price for crude oil.

Some will ask, “is this a real price?”  In one sense, no.  We won’t see less than free gasoline anytime soon.  The 2nd or 3rd next nearby futures contract is a better reflection of what is a normal price under current conditions.  On the other hand, back in our futures days,[4] we remember a squawk box conference where a futures analyst suggested a price of a commodity had become “artificial”…to which a broker responded, “the margin calls, sir, are quite real.”  There was damage to some investor accounts due to this debacle, to say nothing about participants in futures that made outsized gains and losses unexpectedly; imagine how it would be if a long equity position could see the stock price fall below zero.  I am not sure this will ever happen again, but the continued squeeze on storage means that at every expiration there is a chance that something like this could be repeated.[5]  If it does, the CME contract is in grave danger; we could see a shift to using Brent futures, which exhibited none of this behavior because it has wider storage options, including a cash settlement.  The broader issue is that oil fundamentals are abysmal and until supply contracts and demand expands, prices will remain under pressure.

In the details, U.S. crude oil production fell 0.1 mbpd to 12.2 mbpd.  Exports fell 0.5 mbpd, while imports declined 0.7 mbpd.  Refining activity fell 1.5%, a bit less than the 2.0% decline forecast.  The inventory build was mostly due to the continued collapse in refinery operations.

The above chart shows the annual seasonal pattern for crude oil inventories.  The last four weeks have pushed stockpiles almost “off the charts.”  Although not totally unexpected, the divergence in seasonal patterns could diverge in a bearish fashion in early June.

Based on our oil inventory/price model, fair value is $33.63; using the euro/price model, fair value is $44.77.  The combined model, a broader analysis of the oil price, generates a fair value of $38.70.  As we noted recently, the model output is less relevant as there is a non-linearity tied to the loss of storage capacity that cannot be fully captured with these models, which has been clearly exhibited over the past week.

As promised, here are a couple charts that look at U.S. oil demand.  The chart below shows the four-week average of gasoline supplied to the distribution system.  The combination of rising inventories and lower demand has pushed up the current days to cover to nearly 48 days; the average is 25 days. 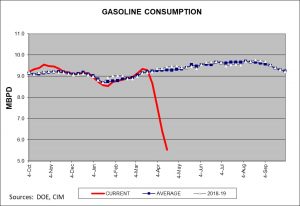 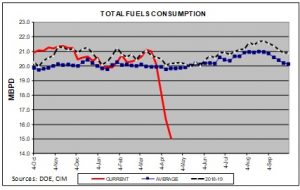 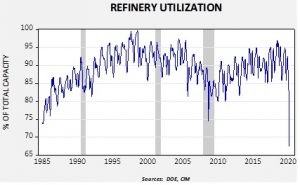 The last time we saw a drop of this magnitude was during the depths of the Great Financial Crisis.  Over the past four weeks, refineries have reduced their oil consumption by 3.4 mbpd, far exceeding the drop of 0.6 mbpd in production.

So, now that oil prices have fallen precipitously, what happens now?  There is a good chance that prices stay low for a rather long time.  The market is building a major supply overhang that will take a long time to remove.  This supply problem is being exacerbated by collapsing demand caused by the policies to reduce the spread of COVID-19.  Thus, barring some event that reduces supply or boosts demand quickly, oil prices will likely languish at least into late summer.  What sort of events could support a recovery in prices?

A geopolitical event in the Middle East.  The potential for a disruption in oil flows is always possible.  Lately, Iran has become more aggressive in harassing shipping in the Persian Gulf.  The White House has warned Iran about this behavior.  We doubt Iran wants a full-scale conflict with the U.S., and we doubt the U.S. wants a war either.  There is the potential that both parties could stumble into a conflict, but it isn’t likely and would not be a reason to buy oil at this point.

Governments could absorb some of the overhang for strategic reserves.  Such purchases would make sense.  Oil prices are unusually cheap and buying emergency storage under such conditions is ideal.  Australia has announced a plan to buy oil and store it in the U.S. Strategic Petroleum Reserve (SPR).  It plans to purchase AUD 94.0 mm ($59 mm), roughly four million barrels of oil (at WTI $15 per barrel).  China has announced purchases as well, although the actual level of injections into strategic reserves is unknown.  The Trump administration has suggested SPR purchases but hasn’t been able to convince Congress to allocate funding.  By itself, these purchases would not probably spark a recovery, but the buying would help.

Governments could take more aggressive actions to reduce supply.  In addition to the government taking direct ownership stakes in oil companies to keep them afloat, there are reports that the administration is considering buying oil reserves from producers and simply not developing the purchased reserves, selling them at a later date when prices have recovered.  This action would give cash-strapped producers cash for those assets and, at the same time, reduce future supply.  There is no doubt energy-producing regions of the U.S. could use the relief.  However, this plan is fraught with risk.  It is not hard to imagine that a future administration could have a different policy on oil production and simply never sell or develop the purchased reserves.  At the same time, this policy could have the same issues as adding oil to the SPR; it works in the short run but fashioning a policy to sell the reserves or sell oil out of the SPR has never really been done.  Nevertheless, there is a chance that radical action may be taken.

Liquidate.  Deep recessions and depressions reveal who is a marginal producer and who has staying power.  Strong firms would likely prefer a wave of bankruptcies that would allow them to acquire assets cheaply.  The fact that there is opposition to support from the oil industry suggests this sentiment remains strong.  It would probably last until the strongest producers face bankruptcy; then support would be broadly welcomed.  To some extent, this is the other side of the aggressive government action.

Overall, we have probably seen the lows in oil prices.  It may be a few months before we see prices improve.  The key factor for recovery will be a significant recovery in economic activity, which will likely come by autumn.  Until then, prices will likely range in the teens into the summer.

In other news, the U.S. has ordered Chevron (84.44, +2.80) to halt operations in Venezuela by December and stop all production now.  Although we doubt this will help reduce supplies all that much, it will disappoint the company, which had held on in the country to try to benefit from if or when the Maduro government finally leaves.

[1] Of course, this is Bill “talking” in the royal sense.

[3] Margin on June futures is $6,400 per contract.  There are 1k barrels per contract, and so, at $20 per barrel, the total value of a futures contract is $20k.  The ETP fully funds the contract but is only required to maintain the margin.  The rest is usually held in T-bills which generate some interest income.

[5] BTW, if you were wondering if a retail client could buy and hold crude oil, here is a story about that.