[Posted: 9:30 AM EDT] It’s employment Friday.  We cover the data in detail below, but the quick take is that labor markets are tightening.  Although the unemployment rate rose, both the labor force and underemployment fell.  August can have seasonal adjustment issues (it can be difficult to capture school/employment flows) and thus we will likely see revisions.  The financial markets are taking the data as evidence of overheating, likely due to the faster than expected rise in wages.  Interest rates are higher, the dollar is stronger and equity values have declined.  Here are the other items we are watching today:

Brexit optimism: Comments suggesting some degree of thaw between the EU and the U.K. sent the GBP higher this morning.  EU negotiators indicated that a modified border in Northern Ireland could be workable.  Earlier in the week, Chancellor Merkel called for compromise and relaxing the border issue would be an important step in that direction.  If there were a hard Brexit with no deal, border checks on the Ireland/Northern Ireland frontier would return and potentially increase tensions between Protestants and Catholics that have rocked the region for decades.

Brazilian elections: Brazil will hold its first round of presidential elections on October 7.  On October 28, there will be a run-off to determine a majority for president.  This election season has been quite unusual.  For example, the leading candidate, former president Lula da Silva, cannot run…because he is incarcerated.  Polls suggest he would capture around 35% of the first round’s vote.  His replacement, Fernando Haddad, is only polling at around 6%.  And, he has come under investigation on corruption charges.[1]  In another twist, the current official front-runner, Jair Bolsonaro, a hard-right-wing candidate, was stabbed at a campaign rally yesterday.[2]  Initial reports suggested that Bolsonaro, currently polling at around 22%, was not seriously injured.   However, these reports turned out to be inaccurate.  According to his family,[3] Bolsonaro was in critical condition and is now listed as “stable” but in serious condition[4] after treatment.[5]  The Brazilian real has been under pressure recently, in part due to the disarray surrounding the upcoming election. 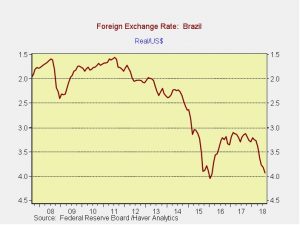 Trade: It doesn’t look like we will get a NAFTA deal before the weekend but talks continue.  Optimism remains that the U.S., the EU, Canada and Japan will reconcile differences.  However, there is no sign of peace with China.  We are past the deadline for implementing another round of tariffs with China, this tranche reportedly on $200 bn of imports with a 25% rate.  We do expect an announcement at any time, although no timetable is in place.  Once announced, we expect China to retaliate in kind.  We may be seeing an evolving trade policy that is designed to focus on China.  Reports from China suggest that is Beijing’s take.

Social media under the gun: High-ranking executives from some of the most prominent social media firms have been testifying in the Senate over competition and free speech issues.  Now, the DoJ is considering an investigation into the free speech and competition issues with these companies.  Public scrutiny has been building against these tech giants for some time.[6]  However, the momentum against them does appear to be increasing.

Threats to U.S. troops in Syria?  Russia has warned U.S. military officials that Russian forces, combined with Syrian troops, are preparing an attack in an area where U.S. military personnel are in place.[7]  The region of concern is in southeastern Syria in an area called At Tanf.  This is one of the two remaining strongholds of rebel troops in Syria, the other being Idlib (which will be the topic of next week’s WGR).  Although we doubt Russian troops would directly attack American soldiers, it could create a major international crisis if they do.

Swedish elections:[8] The Swedes go to the polls on Sunday in what has been a very divisive election season.  For most of the postwar era, Sweden has been dominated by a center-left coalition led by the Social Democrats.  This party and its coalition partners are currently polling at 40.2%.  Center-right parties, the traditional opposition, are polling at 37.7%.  The major change has come from the Sweden Democrats, a populist, anti-immigration party, which is polling at 19% and was seeing support above 22% just a couple of weeks ago.  The key issue appears to be immigration, which has been a critical issue in the West in recent years.  Neither the center-right nor center-left has indicated it would allow the Sweden Democrats to join in a coalition but a strong showing by this populist party will make it difficult to put a majority coalition in place.  If polls are accurate, Sweden will represent another example of the problem Western nations are facing in dealing with immigration.

This chart shows current crude oil inventories, both over the long term and the last decade.  We have added the estimated level of lease stocks to maintain the consistency of the data.  As the chart shows, inventories remain historically high but have declined significantly since March 2017.  We would consider the overhang closed if stocks fall under 400 mb.  This week’s decline in inventories is in line with seasonal trends.  Refinery utilization rose modestly to 96.6%, up 0.3% from last week.  Oil production reached 11.0 mbpd.

As the seasonal chart below shows, inventories are late in the seasonal withdrawal period.  This week’s decline is normal but the size of the withdrawal was higher than usual.  Over the next few weeks, we look for inventories to approach 400 mb, which would signal the end of the storage overhang that has developed over the past few years. 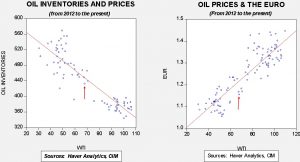 Based on inventories alone, oil prices are below fair value price at $73.62.  Meanwhile, the EUR/WTI model generates a fair value of $58.13.  Together (which is a more sound methodology), fair value is $63.12, meaning that current prices are well above fair value.  However, the most bearish factor for oil is dollar strength.  It will be difficult for oil prices to move higher without some reversal in the greenback.

A couple of items on the oil markets—first, Saudi Arabia is boosting its oil exports[9] to the U.S. in response to President Trump’s pressure to reduce oil prices.  This decision could lead to an interesting situation.  If the Saudis sell more oil to the U.S., it could widen the spread between WTI and Brent, encouraging U.S. producers to export more U.S. oil.  If the U.S. had adequate infrastructure in place, the Saudis’ actions would certainly lead to a “merry-go-round” of oil flows.  However, the U.S. doesn’t yet have the infrastructure in place to make U.S. exports seamless, so the likely outcome is weaker WTI but stronger Brent.  Second, the U.S is warning[10] European firms not to break sanctions with Iran.  Washington threatens that the U.S. will retaliate against Europeans, perhaps denying them access to the U.S. financial system, if sanctions are not honored.

[6] See our review of The Four: https://www.confluenceinvestment.com/research-news/reading-list/