[Posted: 9:30 AM EDT] The primary features of this morning’s trade are rising interest rates and a stronger dollar.  Chair Yellen is becoming increasingly hawkish; so far, equity markets are holding their own.  Here are some of the news items we are tracking:

BREAKING: German FM Wolfgang Schäuble has indicated he is willing to give up the finance ministry and lead the CDU/CSU in the Bundestag.  Schäuble is a stalwart in the Merkel government and so this move was not expected.  This action may show that Merkel is struggling to build a coalition and needs the finance mandate to woo potential coalition partners.  Initial market reaction has been bearish for the EUR as Schäuble leaving the government suggests disarray.  At the same time, it is possible the FDP is pressing Merkel for the finance ministry as a condition of joining the government.  The FDP leans anti-Eurozone and would call for a hard line against the southern tier.  Thus, an FDP finance ministry would probably be bullish EUR.

Initial tax plan to be unveiled today: A rough outline of tax reform is expected to be revealed today.  Although there will be many electrons dedicated to parsing out the details of what is released, investors shouldn’t get overly concerned about what is seen today because if a deal is struck it probably won’t look like what is proposed today.  We do expect to see a marginal cut in personal rates; corporate taxes will be adjusted lower with credits reduced.  The basic method of tax reform is to lower the rate and broaden the base.  The former is self-evident; the latter means getting rid of deductions and credits designed to steer behavior.  The problem with broadening the base is that one party’s wasteful tax expenditure and sop to special interests is another party’s critical tax relief that is elemental to the continuation of Western civilization.  We continue to pay attention to this issue but won’t go into detail until later when (or if) a real program emerges.

Yellen the hawk: In a speech yesterday, Chair Yellen reiterated the message of the Fed, indicating a path of rate hikes and balance sheet reductions.  We had expected Chair Yellen to use the latter to stall action on the former.  However, she is apparently moving to keep the two policy items separate, suggesting she doesn’t see balance sheet reduction as a removal of accommodation.  We tend to agree with her that reducing the balance sheet, by itself, won’t affect the economy much.  Although the Fed argues that expanding the balance sheet lowered long-duration yields by reducing the term premium, we suspect that falling inflation expectations, not an expanded balance sheet, caused the term premium to decline.

This chart shows the expectations of a rate hike at the December meeting, derived from fed funds futures.  Current expectations for a hike are around 70% and have increased significantly.

Why has Yellen turned hawkish?  It is important to note that Yellen came of age during the 1970s and policymakers who did their academic work in this period are more inclined to fear inflation.  It may be that she is planning on leaving in February and worries that the next Fed chair will be a dove and thus wants to remove stimulus while she can. 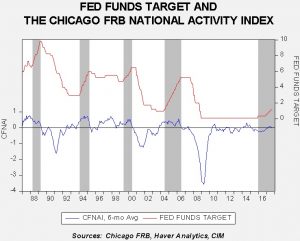 This chart shows the past four tightening cycles and the current cycle, shown in gray, along with the Chicago FRB National Activity Index.  A reading above zero in the latter index indicates above-trend growth.  Note that the economy was significantly stronger in past tightening cycles.  The only argument for tightening with this level of economic growth is that the policy rate is below a rate consistent with equilibrium (on-trend) growth, which seems to be a stretch.  The bottom line here is that further Fed tightening will increase the risk of a policy mistake.

Women drivers in Saudi Arabia: On its face, this isn’t market-making news, although some are trying to spin it as such as it will increase the number of autos sold in the kingdom.  Perhaps…however, the big takeaway from this move is that the crown prince is steadily modernizing Saudi Arabia.  We have been hearing rumblings that the crown prince wants to weaken the grip of the Sunni religious establishment in Saudi Arabia, believing it has become an obstacle to the changes the kingdom will need to make in order to deal with the challenges of the next 20 years.  This action is important because, symbolically, it suggests that modernizers within the royal family are gaining the upper hand.

Populists on the march: Earlier in the week, Germany showed how populists are gaining ground in Europe.  The GOP primary in Alabama added to the evidence.  Sen. Corker (R-TN), an establishment stalwart, announced he won’t seek re-election next year.  Politico notes that former VP Biden is considering a run for president in 2020 as an anti-populist.[1]  The establishment center-left and center-right is taking a drubbing; this is a theme we have been monitoring for a long while, but the bottom line is that it could undermine investor confidence at some point in the future if it gains momentum.