[Posted: 9:30 AM EDT] The FOMC meeting ends today but, to a great extent, the Fed is being overshadowed by political events.  Here is what we are watching today:

The FOMC meeting: The FOMC meeting ends today with near certainty of a 25 bps rate hike.  There is a press conference with this meeting so we may get some indication of future policy, although we would not expect Chair Powell to tip his hand in any particular direction.  In the statement, we will be watching closely for whether the word “accommodative” is removed.  If it is, it could tell us one of two things; first, the Powell Fed is done with forward guidance and we will have to estimate the bank’s policy stance in the future, or second, forward guidance is still operating and the FOMC believes policy is closer to neutral.  A call that policy has achieved neutrality would be dollar bearish, Treasury and equity bullish.  If the removal of the word accommodative merely means the Fed is out of the forward guidance business, then the market impact should be mostly neutral.  However, unless Chair Powell makes explicit reference to ending forward guidance (if we were in the press conference, this is the issue we would press for a clear answer to), then look for the market to take the language change as dovish.

Here is the latest iteration of our Mankiw Rule models.  The Mankiw rule models attempt to determine the neutral rate for fed funds, which is a rate that is neither accommodative nor stimulative.  Mankiw’s model is a variation of the Taylor Rule.  The latter measures the neutral rate using core CPI and the difference between GDP and potential GDP, which is an estimate of slack in the economy.  Potential GDP cannot be directly observed, only estimated.  To overcome this problem with potential GDP, Mankiw used the unemployment rate as a proxy for economic slack.  We have created four versions of the rule, one that follows the original construction by using the unemployment rate as a measure of slack, a second using the employment/population ratio, a third using involuntary part-time workers as a percentage of the total labor force and a fourth using yearly wage growth for non-supervisory workers. 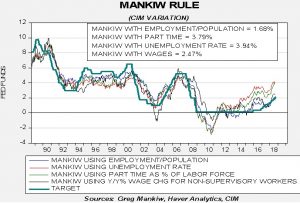 Given this model, the FOMC can defend its tightening policy; even using the most dovish of the variations, the FOMC would need to raise rates to 2.75% to achieve a tight policy.  The other models support multiple rate increases.  At present, we are not in a situation where there should be a high degree of dissention but we could see divisions develop by the middle of next year.

We have also updated our hawk/dove table and have made a few significant adjustments.  Governor Brainard’s position that policy tightening is necessary to prevent asset mispricing (or, in normal language, bubbles) changes her from a 4 (on a 1-5 scale, with 1 being most hawkish) to a 3.  Boston FRB President Rosengren and Chicago FRB President Evans have echoed Governor Brainard recently, shifting the former from 3 to 2 and the latter from 4 to 3.  NY FRB President Williams’s comments on the term premium moves him from 2 to 3.  Atlanta FRB President Bostic’s comments regarding the policy rate and the yield curve shifts him from 3 to 4, and similar comments on the yield curve from Dallas FRB President Kaplan and Philadelphia FRB President Harker take them both from 3 to 4 as well.  In total, these changes suggest the overall FOMC is slightly dovish, while the configuration of voters from this year and next is remarkably similar. 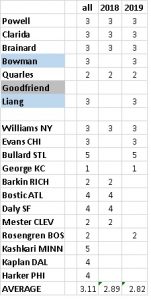 Russia’s Middle East struggles: Russia engaged in the Syrian civil war because it didn’t want to see an ally fall.  The Assads have been allies of the Soviet Union/Russia since WWII.  In addition, the Putin regime wanted to project power and show it could replace or compete with the U.S. on a global scale, harkening back to the Cold War days.  Now, Russia is discovering the region is difficult and expensive to manage.  Russia is trying to keep Iran and Israel apart; Iran will not cooperate with Russia if it means reducing its reach into Lebanon.  Israel, as the bombing shows, is opposed to Iran’s goals.  Recently, Syrian anti-aircraft missiles were deployed by the regime against Israeli aircraft and the Syrians inadvertently shot down a Russian military aircraft.  Initially, both Russia and Israel appeared determined to prevent the incident from upsetting relations.  However, that goal has apparently passed.  Russia has indicated it will, at long last, supply Syria with the S-300, a sophisticated anti-aircraft system.[1]  Russia has indicated it would “sell” this platform to Syria for years but never did so in order to not anger the Israelis and the Americans.  This is a serious escalation of tensions and increases the odds of expanding the already existing conflict in the region.

One trend that seems to be developing is that Iran is facing increasing isolation.  India announced yesterday it will stop buying Iranian oil after U.S. sanctions are fully implemented on November 1.  Russia’s decision to create a demilitarized zone in Syria supports Turkey’s goals.  Russia may have concluded it has little interest in helping Iran extend its power in the Middle East and may end up supporting Syrian independence from Iran and supporting Israel against Iran as well.  We are watching Saudi/Russian relations.  The recent OPEC decision not to boost output despite President Trump’s insistence on lower oil prices (and his U.N. speech calling out OPEC for “ripping off the world”) may be more due to Russia offering support to the kingdom against Iran. For Russia, curtailing Iran probably makes sense; the most effective policy in the region is creating a balance of power where no nation in the area dominates the others.  The U.S. abandoned this policy with the invasion of Iraq in 2003 and the Middle East has been in turmoil ever since.  As Russia attempts to expand its influence, it appears to be trying to rebalance power in the region and the loser in this effort may be Iran.  We do note that Russia would be getting help from the U.S. in isolating Iran; National Security Advisor Bolton warned European nations not to violate American sanctions as they would face “terrible consequences.”[2]

MSCI increasing China’s representation?[3]  MSCI is apparently considering increasing its weighting to China by adding more “A” shares to its emerging market index.  Four months ago, the index added 235 “A” shares to its index, making it 5% of the total index and, with the “H” shares, lifting China’s exposure in the EM index to roughly 31%.  MSCI is proposing to double the number of “A” shares, which would boost the total Chinese component to 40.3%.  Given the growth of passive investment, such a move would lead to China dominating this emerging market index, making the overall performance of emerging markets very dependent on China.

Another defeat for the Chancellor: Chancellor Merkel suffered another political defeat when her close ally, Volker Kauder, was defeated by Ralph Brinkhaus for the positon of parliamentary leader.[4]  Merkel has suffered a series of defeats and challenges within her coalition.  The junior partner of her “grand coalition,” the SDP, recently demanded the firing of her head of intelligence, Hans-Georg Maassen, for comments he made supporting right-wing groups.  Although he was removed from his post, he remains part of government as a special advisor to CSU Leader Horst Seehofer,[5] who earlier this year had a row with Merkel over border security.  One of the growing fault lines within the CDU/CSU coalition is immigration and the rise of the populist right AfD party.  Elements within the CSU, including Brinkhaus and Seehofer, are open to contact with the AfD, seeing the populist insurgent party as a potential ally.  The more establishment CDU, of which Merkel is a member, loathes the nationalist bent of the AfD and wants to quash the movement.  As we are seeing nearly everywhere in the West, populist nationalism is on the rise, in part a function of income inequality.  A retreat from globalization is a key element of populism; it is worth noting that this was an element of President Trump’s speech yesterday to the U.N. General Assembly.  So far, Merkel has fended off these challenges, but they are weakening her grip on power.  It isn’t obvious who would succeed her.  Political uncertainty in Europe will likely put some degree of bearish pressure on the EUR.

China blinking?  China announced a tariff cut to over 1,500 items,[6] taking the average to 7.8% from 9.5%.  We view this adjustment as mostly cosmetic, although it could be seen as (a) a concession to the U.S. and the world that China’s tariffs are too high, or (b) China trying to build its goodwill with the rest of the world, offering a contrast to the U.S.  We suspect this is more of the latter, although we will be watching to see if the Trump administration frames the move as the former.