North Korea returns: After President Trump’s speech to the UN we have been waiting for a response from the Kim regime.  Overnight, we got our answer.  The Young Marshal offered a rambling response to Trump but, more importantly, suggested he is considering a thermonuclear test in the waters of the Pacific Ocean.  Non-underground testing of nuclear devices has become rare; the last one we could find was by China in 1980.  Underwater testing was usually done to evaluate the impact on naval vessels; if the test occurs near the surface it can disperse significant amounts of nuclear fallout in the water and create radioactive steam.  However, contamination is generally limited to the area around the blast.  Still, such a test would be a major escalation of tensions.  If the underwater test is a device offshore tethered to a barge (the usual method), it’s a problem but not a red line.  On the other hand, if the test is a warhead on a missile that is launched into the ocean and detonated, that would likely cross a red line and bring a military response from the U.S.  The Trump administration has unveiled new financial sanctions that could potentially raise pressure on Chinese financial entities dealing with North Korea.

There is no doubt that tensions are escalating and the bellicose rhetoric is pushing both leaders into corners that will be difficult to walk back from without losing face.  So far, financial markets are taking the news in stride.  As we have seen recently, most of the impact has been in the forex markets; the dollar has declined,[1] Treasuries are modestly higher and equities are mixed.  Although financial markets are concerned, there has been no discounting for war.  If a conflict does break out, we would expect a much larger downturn in equities; the duration and depth would be dependent upon the level of intensity and the outcome of a conflict.

German elections: Germans go to the polls on Sunday.  Current polling strongly suggests that Chancellor Merkel will remain in her role after the elections.  The latest polls show Merkel’s CDU/CSU holding a comfortable 14.5% lead over her nearest competitor, the Social Democrats (SPD).  There are two unknowns in this election.  First, Merkel will almost certainly need a coalition partner.  The current government is a “grand coalition” of the CDU/CSU and the SPD.  If the Free Democrats (FDP), a more libertarian party, get enough seats, you might see a CDU/CSU and FDP government.  This has been a traditional alignment in Germany.  A CDU/CSU and FDP coalition would probably take a harder line on the Eurozone issue as the FDP is much less enamored with the EU and the Eurozone.  Currently, polling suggests another grand coalition, meaning the status quo continues.  The second issue is the rise of the AfD, which is a right-wing populist party.  It is polling close to 11%, meaning it will almost certainly gain representation in the Bundestag.  No other party plans to join the AfD but its presence in the legislature will be a jarring development and highlights that, even in Germany, populism is gaining strength.

Kurdish referendum: On Monday, Iraqi Kurds are planning to hold a referendum on independence.  The Iraqi government, the U.S., Iran and Turkey all oppose the move.[2]  However, on the ground, the situation is more complicated.  First, the Kurds themselves are not unified.  The Syrian Kurds have closer relations with the Kurds in Turkey and are not all that close to the Iraqi Kurds.  The Syrian/Turkish Kurds are aligned with a leftist (neo-Marxist) movement of the Kurdistan Workers Party (PKK).  The Turkish government is much more concerned about a Kurdish state in Syria because it would have common cause with the Kurds in Turkey.  On the other hand, the Iraqi Kurds have been useful to Turkey.  A Kurdish state in Iraq would be deeply dependent on Turkey—oil pipelines from the Kurdish region transverse Turkey.  About 90% of Iraqi Kurdistan’s revenue comes from oil.  In addition, a Kurdish state split from Iraq narrows the “Shiite Crescent” that gives Iran influence from Tehran to Lebanon and reduces Iraq significantly.  Turkey isn’t comfortable with a Kurdish state on its border but it could be useful.  We expect the referendum to go forward and the vote to clearly favor independence.  From there, the negotiations begin.

May speaks in Florence: PM May is giving a speech in Florence today.  There is great anticipation over her comments because progress on Brexit has been slow and the clock is running.  She is expected to allow the EU and the U.K. to split in about 18 months, but it is thought that she will ask for a two-year transition period to prevent a “regulatory cliff” and chaos.  We doubt the EU will comply with her wishes; the EU wants to raise fears among others that leaving the EU is dangerous and costly.  The downside for the EU is that hurting the U.K. will harm the EU as well.  Moreover, the U.K. is arguably[3] the most competent military in Europe and NATO could become a less impressive force without full participation from the U.K. military.

The flow of funds: Yesterday, the Federal Reserve released the Financial Accounts of the U.S., which was formally known as the “flow of funds” report.  It is a rich report with lots of interesting information.  We will have more to detail on this report in an upcoming Asset Allocation Weekly, but one chart we will show today is household net worth as a percentage of after-tax income.  As shown on the chart below, net worth has hit another new record, a reflection of elevated asset prices.  As the history shows, elevated levels are followed by corrections, mostly due to weaker equity markets.  Note that declines in the level of household net worth are closely tied to recessions.  At this juncture, none of our recession indicators are suggesting that a recession is imminent.  Thus, the chart confirms equity markets are elevated, but nothing more. 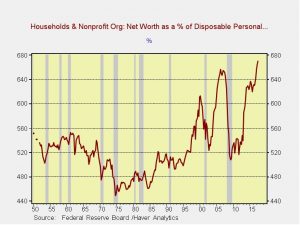 [1] One question we have been getting recently is, “Why is the JPY a flight to safety currency?”  It’s a good question.  The best answer is that Japan, due to years of current account surpluses, has significant levels of overseas investments.  When crises hit, Japanese investors pull some of their money home, causing a rally in the JPY.

[2] The only regional power showing unabashed support is Israel.

[3] The French military is considered a close second.