[Posted: 9:30 AM EST] The big overnight news came from the OPEC meeting, where the latest is that the cartel has agreed to reduce production by a reported 1.2 mbpd.  There are also reports that OPEC expects non-OPEC producers to cut output by an additional 0.6 mbpd.  We still don’t have details on the cuts.  According to reports, it seems that the Saudis did “blink” in that they are apparently allowing Iran to operate without a quota.  If this is the case, it is a major shift by the kingdom and suggests power is shifting to the Tehran-Baghdad-Moscow axis.  Regarding the non-OPEC cuts, Russian cuts are said to be at least 0.2 mbpd to maybe 0.4 mbpd.  However, we seriously doubt Russia will actually cut anything and we really don’t expect other non-OPEC producers to do anything either.

This is a three-day tick chart for nearest oil futures.  The jump today is obvious.

So, what happens now?  Here are a few thoughts:

Financial markets, by design, discount the future.  Using our inventory/dollar oil price model, assuming a €/$ exchange rate at today’s levels of 1.0637 and oil prices of $48.20 (about where we are today), this price is discounting U.S. commercial crude stockpiles[1] of 421 mb, or a decline of about 100 mb from current levels.  So, assuming 3.0 mb draw per week, it will take about 33 weeks to reach this level…or assuming 2.0 mb draw per week, we are about a year ahead of ourselves.  This price reaction is probably overdone.  Now, it is possible that the dollar could weaken.  A euro at 1.1475 would justify current oil prices assuming constant inventory levels.  However, for the near term, we would not expect the dollar to weaken.

We may see the Brent-WTI spread widen.  Much of the OPEC supply is priced at Brent.  However, higher oil prices will start to spur U.S. production which, at current spread levels, will tend to raise U.S. inventories.  The WTI price will need to fall relative to Brent to support U.S. exports.

Overall, we are somewhat surprised by the OPEC news, although the “devil remains in the details.”  In other words, until we see an actual roster of production quotas, this is all jawboning.  The fact that the Saudis appear to have caved increases the likelihood of an agreement.  As we discussed above, there is a lot of optimism already in the market that will require a significant decline in inventories.  At the same time, the very fact that OPEC is trying to support prices is positive for oil and, at least for a while, traders will probably give the cartel the benefit of the doubt.  Interestingly enough, OPEC cuts will probably give market share to non-OPEC output over time.

In yesterday’s GDP data, we note that profit margins have improved. 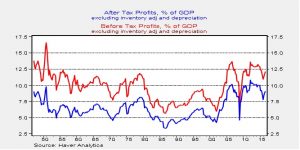 [1] Adding back in pipeline oil.