[Posted: 9:30 AM EST] On the eve of the OPEC meeting, the cartel is struggling to come to an agreement, with Iraq and Iran still insisting on a production freeze above their current levels of output.  Russia has decided not to send a delegate.  If a deal of substance is going to be made, it will require unilateral cuts from Saudi Arabia.  Because oil demand is price inelastic in the short run (which means that a 1% rise in price will lead to a <1% fall in demand), revenue would rise to all producers; however, for Saudi Arabia, any rise in revenue would be less than its rivals.  It also runs the risk that non-OPEC producers, mainly U.S. shale producers, will lift output and fill any reductions OPEC makes.  Although the odds of a substantial deal are low, we would not be shocked by some sort of face-saving agreement in which non-specific cuts are promised.  Unfortunately for the cartel, a deal lacking substance will probably fail to lift the market because the stronger dollar is working against higher oil prices. 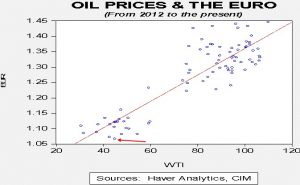 Current oil prices are more consistent with a EUR/USD exchange rate closer to $1.100.  For the most part, oil prices have ignored the impact of Trump’s election.  It seems rather obvious that OPEC hopes have allowed oil prices to levitate in the face of a stronger dollar.  But, a disappointing OPEC outcome runs the risk that oil will fall to around $37 per barrel.

It appears that Park Geun-hye, the president of South Korea, is preparing to resign from office.  Her administration has been rocked by a scandal where a Rasputin-like figure appears to have used her relationship with the president for personal gain.  It is unclear whether the legislature will accept her resignation or press for impeachment.  Resignation would probably not be immediate, whereas impeachment would remove her from office more quickly.  Park has been facing massive protest rallies against her government as the scandal worsens.  What is concerning about this outcome is that as the South Korean government is distracted with internal strife, the geopolitical situation in the Far East is becoming increasingly unstable.  The president-elect has officially killed TPP, raising the impression that the next government is ending the “pivot” to Asia, and, as we noted in our recent WGR series, the Philippines has moved toward China.  It isn’t out of the question that the mercurial leader of North Korea, Kim Jong-un, could view this as an opportunity to “make some noise,” which could be anything from nuclear blackmail to military action against the South.  We don’t think Kim will necessarily do anything rash, but the odds have increased.  It behooves the South Korean leadership to act quickly to address the presidential question because the longer the turmoil lasts, the greater the odds are that North Korea takes the opportunity to create problems.