Once again, our Comment opens with an update on the Russia-Ukraine war, where the leading news over the next couple of days is likely to be the major allied diplomatic meetings in Europe.  We next review a range of international and U.S. developments with the potential to affect the financial markets today.  We conclude with the latest news on the coronavirus pandemic.

Russia-Ukraine:  Russian invasion forces remain essentially stalled in northern and eastern Ukraine, while the Ukrainian defenders are reportedly mounting modest counterattacks in an effort to push them back or at least disrupt their ongoing resupply efforts.  The Russians appear to be making some progress in consolidating their hold on the country’s southeastern coastline, but vicious street fighting continues in the city of Mariupol.  According to U.S. defense officials, more than 10% of Russia’s invasion troops have been killed or wounded and are no longer in the fight.  To make up for those losses and regain momentum, Russian President Putin appears to be pressuring Belarusian President Lukashenka to throw his troops into the battle.  However, Ukrainian military officials say Lukashenka and the Belarusian military strongly resist that idea, at least for the time being.

Taiwan:  As Taipei continues to consider the lessons of Russia’s invasion of Ukraine, officials say they may extend compulsory military service beyond the current four months.  Taiwan has been gradually shifting from a conscript military to a volunteer-dominated professional force, but Beijing’s growing pressure against the island it claims as its own, as well as Russia’s invasion of Ukraine, have prompted debate about how to boost civil defense.

United Kingdom:  The February Consumer Price Index was up 6.2% year-over-year, accelerating from the January gain of 5.5% and marking the highest inflation rate since 1992 (see chart immediately below, and the data tables farther down).  The figures illustrate how the current inflation problem is widespread around the world.  The figures also suggest the Bank of England will face pressure to hike interest rates further in the coming months. 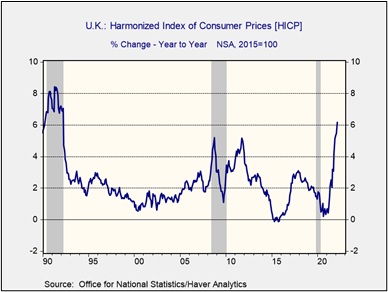 United States-United Kingdom:  The U.S. and the U.K. struck a trade accord under which the U.S. will allow the U.K. to ship “historically-based sustainable volumes” of steel and aluminum products to the U.S. without the levies imposed under the former Trump administration, while the U.K. will lift levies on American whiskey, motorcycles, and tobacco.

U.S. Monetary Policy:  Cleveland FRB President Loretta J. Mester yesterday said the Fed would have to raise interest rates many times as it seeks to lower very high levels of inflation.  According to Mester, the benchmark fed funds rate will have to reach 2.5% before the end of this year and even higher in 2023.

Canada:  Prime Minister Trudeau and his center-left Liberal Party struck an agreement in which the leftist New Democratic Party will support his government in key votes until mid-2025.  The deal ensures that the Liberal government, which currently holds only a minority of seats in parliament, will be able to stay in power for at least the next three years.