[Posted: 9:30 AM EDT] Good morning and happy Monday!  We are essentially halfway through summer, semi-officially marked by the All-Star Game, the “midsummer classic.”  Trading is quiet; investors should note that activity tends to slow during the summer.  Europe is essentially on holiday to some extent from now into Labor Day.  Here is what we are watching today:

Powell speaks: Chair Powell will make his semiannual testimony to Congress on Wednesday and Thursday this week.  We also note that the Fed minutes will come out on Wednesday.  Although the strong labor market data on Friday quelled some of the ardor for rate cuts, the financial markets are still leaning toward a cut at the end of the month.  If Powell wants to affect that assessment, he will likely do so on Wednesday.  Thus, there is some risk that Powell could turn hawkish this week; we don’t expect that outcome but the potential does exist.

Meanwhile, the president continues to pressure Powell by threatening his position.  We, and others, have noted that some of the governor candidates the president has considered seem to have a hard money bias.  Stephen Moore had an affinity for the gold standard and strongly criticized the Fed’s monetary policy during the Obama presidency.  Judy Shelton, who has recently been considered for nomination, also has supported the gold standard.  President Trump isn’t a hard money person (most presidents aren’t, by the way—hard money can get in the way of re-election), so why is he consistently looking to such candidates?  It may simply be partisanship.  If one views the world in terms of loyalty to “teams” and not on the basis of ideology, then Trump may be recommending these gold bugs simply because he expects them to be loyal to his monetary aims regardless of their personal ideologies.  This thought process might explain the hostility toward Powell; the president put him in this job to do what he is asked, not to be loyal to the Federal Reserve as an institution.  We may need to start looking at members of the FOMC not on the basis of their economic leanings but their political affiliation.  If that were to be the case, policy would shift not based on the economy but on who occupies the White House; for example, if the governors lean toward the GOP, then a Democratic president could face hostile monetary policy.  We are not there yet but it is a trend that could develop over time.

So, in light of the employment data, should the Fed maintain current rates?  The employment data is notoriously volatile.  The May data looked really weak; that was reversed in June.  One shouldn’t become overly excited about any single month’s data but look at trends.  Since 2011, the three-month average of payrolls has averaged 200k+ per month.  It currently sits at 171k. 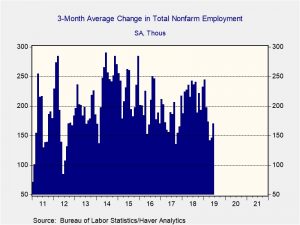 Average weekly earnings have been weakening as well.  We are seeing some declines in the work week which means that take-home pay may be stagnating even with hourly earnings rising. 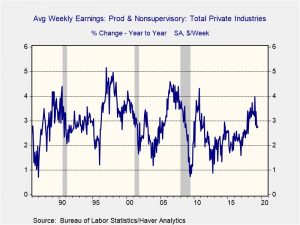 Although Friday’s data was solid, there is some underlying weakness.  If the Fed doesn’t ease at the next meeting, it could face a weak July employment report which would bring further criticism.  Overall, we think there are enough pockets of weakness to give the Fed cover if it wants to lower rates.

China foreign reserves: Foreign reserves in June rose $18.2 bn, well above the $2.0 bn forecast.  The rise suggests China has not been spending reserves to support the value of the CNY. 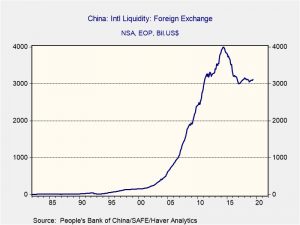 In other China news, credit card debt by households is growing rapidly and has caught the attention of the credit rating agencies.  Household debt has increased steadily since 2008; although it remains well below U.S. levels compared to GDP, the pace of growth is concerning.

The problem is that the Chinese financial system doesn’t have much experience with widespread defaults and loan deterioration at the household level.  With businesses, loan deterioration is usually masked with rollovers and covert restructuring; that probably won’t occur with households due to the relative debt size.[1]  A household debt crisis in China would not only lead to weaker growth but might also foster social unrest.

Hong Kong: In the fourth mass demonstration of the last month, thousands of political protestors again marched through Hong Kong.  The difference this time, however, was that the protesters targeted a shopping area frequented by Chinese tourists, where mainland law is enforced.  An organizer said the aim was to make sure mainlanders become more aware of Hong Kong’s anger over the gradual erosion of civil liberties as Beijing tries to assert more control over the territory.  Although the protests were reportedly peaceful, there is the continuing risk of a crackdown from Beijing.

Greece: In parliamentary elections over the weekend, the center-right New Democracy Party came out on top with approximately 39.8% of the vote, beating the incumbent left-wing Syriza Party’s 31.5%.  New Democracy will have 158 seats within the 300-seat legislature,[2] making its leader, Kyriakos Mitsotakis, the country’s new prime minister.  The New Democracy Party will represent the first single-party government in Greece in a decade.  Mitsotakis has promised tax cuts, reduced bureaucracy, increased investment and much stronger economic growth.  It remains to be seen whether he can deliver on those goals given the fact that Greece is still subject to stringent fiscal terms under its bailout deal with the EU.  Nevertheless, having a traditional, business-friendly party back in power in Greece is likely to be positive for both Greek assets and overall European assets.

Turkey troubles: Although we did see a sizeable improvement in Turkey’s CPI, which fell from 18.5% in May to 16.0% in June, President Erdogan moved to fire his central bank governor, Murat Cetinkaya, a full year before his term ended.  He was replaced by Murat Uysal, who until recently was an executive at Halkbank, a state-owned commercial bank in Turkey.  The action will likely weaken the independence of the central bank and raise concerns about Erdogan’s management of the economy.  Erdogan has been critical of interest rates in Turkey; the official policy rate is 24%, which is well above inflation. 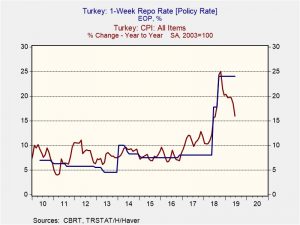 As this chart shows, the current real rate is well above what it has been in recent years.  The firing of a central bank governor simply due to tight policy will worry international investors.  The lira is weaker this morning.

Iran: The country’s atomic energy agency confirmed this morning that Iran has started enriching uranium to a level of 4.5%, breaching the 3.67% limit in the 2015 nuclear agreement.  This action marks Iran’s second significant breach of the agreement, following last week’s move to boost its stockpiles of enriched material beyond the 300 kg limit in the deal.  The Iranians also said they would breach further unspecified limits under the deal in 60 days if the recent U.S. sanctions on Iran aren’t lifted.  The moves aim to raise costs for the Trump administration’s decision last year to pull out of the deal, but they could backfire.  In response to Iran’s moves, the European parties to the deal suggest they may invoke an agreed upon dispute procedure that could end with a full snap-back of the sanctions that were in place before 2015 and an outright end to the deal.  Pressures continue to mount, raising the risk of miscalculation and further tensions or even a military confrontation that would likely boost oil prices.

Venezuela: Opposition leader and self-declared president Juan Guaidó announced he will soon take part in talks with the government of Nicolás Maduro to find a way out of the country’s political deadlock.  In addition, the opposition will apparently meet this week with the EU’s special envoy for Venezuela.  The talks follow two earlier rounds of negotiations in Oslo, suggesting momentum continues for a political solution that could potentially result in Maduro leaving office and market-friendly reforms finally being implemented in the country.

Budget worries:As the summer wears on, the clock is ticking toward a series of fiscal deadlines.  Divisions within both parties are hardening positions and increasing the odds of a fiscal crisis in September.  If an agreement to lift the debt ceiling isn’t reached, the budget sequester process will occur which will lead to reduced fiscal spending and reduced spending in the economy.

[2] Greece gives an additional 50 seats to the party with the largest electoral margin, which reduces the need for coalition governments and makes the political system more stable.