[Posted: 9:30 AM EDT] It’s a fairly quiet morning, typical of mid-summer.  Here are the issues we are watching:

Fed minutes: Most of the media recaps focused on the reduction of the balance sheet.  As we have noted in the past, in theory, this action shouldn’t be a big deal.  Most of QE ended up sitting harmlessly in the banks as excess reserves.  Simply put, the funds from QE were injected into the banking system and then simply sat.  Thus, taking them away shouldn’t have much of an impact. 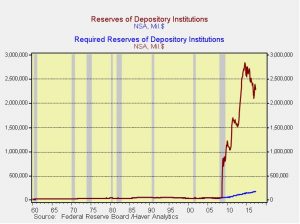 As this chart shows, excess reserves are almost 13x more than required reserves.  Since tapering began, the level of excess reserves has started to decline but still remains high.  Therefore, removing some of these reserves probably won’t prevent loans from being given.

The bigger concern is the psychological impact of shrinking the balance sheet. 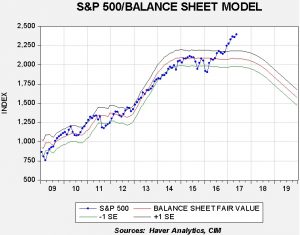 This is a chart we have shown for a while with a new twist; we assume the Fed will begin its process of reducing the balance sheet in September and follow the plans previously released.  Obviously, if the balance sheet affected equity markets in a mechanical fashion, a bear market is looming.  We don’t think this is the case.  We believe that the impact of QE on equities was to reassure investors that the Fed wasn’t lacking tools to stimulate the economy.  If investors are confident about continued economic growth, the impact of balance sheet contraction shouldn’t be a big deal.  However, since we have never seen anything like this before, it is difficult to quantify the risk factor.

Buried in the minutes were concerns expressed about the “increased risk tolerance” of investors as a reason for tighter policy.  As we have noted before, the Fed has lost control of financial conditions.  Until the late 1990s, the Fed could affect financial stress via changes in fed funds.  That relationship broke down in the late 1990s. 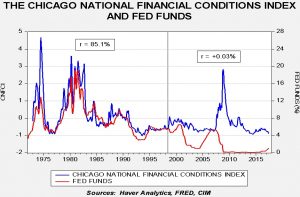 This chart shows the relationship of the Chicago FRB Financial Conditions Index and fed funds.  The blue line measures financial stress, with a higher number indicating elevated stress.  Note that the two series were tightly correlated from 1973 into 1998.  Since then, the two have become almost completely independent.  We believe that the primary reason for the breakdown is transparency; from the late 1980s to the present, the Fed has become increasingly transparent and the more the Fed telegraphed its policy actions, the less policy activity affected stress.  Thus, when financial conditions deteriorated in 2007-10, the policy rate fell to zero and had to be held there before stress declined.  We note that NY FRB President Dudley suggested in a recent speech that the FOMC should be raising rates due to low levels of financial stress.  This could be considered a type of “controlled burn” by the Fed.  What is interesting is that if the relationship between fed funds and the above stress index had remained consistent since the 1973-98 period, then financial stress would be almost twice as low!  Thus, if the FOMC raises rates to lift stress, it will almost certainly overtighten.  This says nothing about the policy nightmare the Fed would face if it made the P/E a policy goal.

The takeaway from the minutes is that the FOMC is on a path of policy tightening and risks will rise over time.

The G-20: This promises to be a contentious meeting.  Merkel and Trump are not getting along.  The presidents of Russia and the U.S. will meet for the first time.  There is talk of trade wars over steel tariffs.  Given that expectations for this meeting are already low, it is hard to imagine there will be a disappointment.  Normally, G-20 meetings are snoozers.  We do expect some friction given all the tensions in the world, but the most likely outcome is that the meeting “won’t be that bad,” mostly because our expectations are so depressed.

North Korea: There isn’t much new to report.  The UNSC took up the issue yesterday.  As expected, Russia and China were reluctant to press hard on North Korea.  The U.S. is making military threats but there isn’t much evidence of mobilization.  As we have noted before, there are no good outcomes with North Korea.