[Posted: 9:30 AM EDT] Yesterday brought a strong rally in U.S. equities.  Here is what we are watching this morning:

Fed meeting: The Fed meeting delivered more than what was expected.[1]  First, the FOMC removed language from previous statements suggesting the path for the policy rate was on a gradual path higher.  Second, the statement suggested the balance sheet could be adjusted in either direction, although it did reiterate that the fed funds target remains the primary policy vehicle.  Essentially, policymakers moved from a path of steady tightening to signaling that further tightening may well be on hold.

What led to the change?  Chair Powell noted the events that led to what appears to be an end to the current tightening cycle.  First, slower global growth apparently entered the discussion.  Although the Fed’s mandate precludes acting as the global central bank (even though it is), the Fed will, on occasion, pay attention to world events.  However, this usually occurs when the world economy encroaches on the U.S. economy.  We are seeing a clear slowing of U.S. growth so the Fed may be thinking the slowdown is coming from abroad.  Second, trade tensions were mentioned, and third, so was the government shutdown.  We do note that the Treasury will hit the debt ceiling in March, although the real funding crunch won’t occur until summer.  Perhaps the Fed is trying to get in front of all that.

We note the financial media is carrying stories from economists and analysts with words such as “perplexed” and “puzzled,” meaning, of course, that they had forecast multiple hikes this year and now appear wrong.[2]  The doves who have been crying for the Fed to stop are now celebrating their influence.[3]

So, what do we think happened here?  It appears to us that two things may be unfolding.  First, Chair Powell may be finally killing the Philips Curve.  The theory, which has guided Fed policy for decades, states that inflation is caused by the degree of slack in the economy.  When slack is removed, the chances for inflation increase.  One of the best measures of slack is the labor market.  Essentially, the Phillips Curve argues there is a trade-off between unemployment and inflation; if you want less of the latter, you have to accept more of the former.  Fed policymakers have clung to the theory even when evidence supporting it has become increasingly thin. 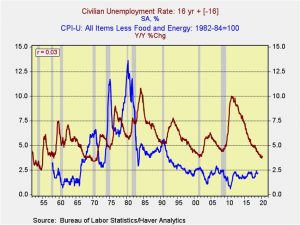 Although FOMC members were aware of these changes, a theory one was raised on is hard to shake.  Accordingly, members of the FOMC continued to use the language of the Phillips Curve even though they tended to ignore it in terms of policy.  Thus, we would often see deviations from the Taylor Rule or the Mankiw Rule, both of which are tied to the Phillips Curve.  Over time, policy seemed to pay an increasing amount of attention to financial markets (hence the idea of the “Fed put”).

Powell appears to be finally ditching the Phillips Curve once and for all.  Why now?  Age probably plays a role.  The idea that scientific progress occurs “one funeral at a time” is part of it.  The economists who came of age in the 1970s are aging out and the newer economists live in a world of lower inflation.  Of course, if policy shifts to deglobalization and reregulation, both very likely given the rise of populism, then the Fed may by ending its use of the Phillips Curve just when it becomes useful again.  But, for now, it appears the Phillips Curve is dead.

This leads us to the second change; if the Phillips Curve is out, what has replaced it?  For now, nothing is official.  But, we suspect the Fed is focusing on inflation and the financial markets.  In a recent Asset Allocation Weekly, we discussed the relationship of policy to the VIX.[4]  The recent jump in the VIX would have been enough to signal a pause to the FOMC.  Another item the FOMC seems to track is the implied LIBOR rate from the Eurodollar futures contract, two-years deferred.

This chart shows the fed funds target and the implied LIBOR rate, with the spread on the upper line of the graph.  We have placed vertical lines at points of inversion.  In general, the Fed tends to stop raising rates at the point of inversion.  The rapid drop in the implied LIBOR rate is a clear signal that the Fed should stop raising rates and, right on cue, that’s what Powell indicated yesterday.

We should note one of the dangers the FOMC has now created for itself with this reversal is that financial markets will struggle to cope if conditions improve and it decides it needs to tighten further.  At the same time, the slowing we are seeing in the U.S. economy and abroad, along with controlled inflation, will likely allow the Fed to stop raising rates here without serious problems.

In terms of market impact, the most obvious was yesterday’s rally in the front end of the yield curve and in equities.  However, we also saw the dollar fall sharply.  As we noted in the 2019 Outlook and elsewhere, we have been expecting the dollar to weaken this year.  The reaction to the FOMC statement supports that idea.

Gold: Dollar weakness supported a strong rally in gold yesterday.  Another factor helping gold is that nations that have run afoul of the U.S. and face financial sanctions are turning to gold in their foreign reserves.  Although gold doesn’t offer a yield, it is transferable and is mostly protected from the U.S. Treasury.  Last year, gold-buying by central banks reached its highest level in nearly 50 years.  The highest year was when President Nixon ended Bretton Woods by closing the gold window.[5]  A weaker dollar combined with central bank buying should support further strength in gold.

China: In this week’s WGR, we opened a two-part report on U.S. relations with China. [6]  Overall, it looks like relations will become more hostile over time.  That doesn’t mean we won’t get a trade deal, but it likely won’t be anything more than a “can-kicking” exercise to help the U.S. and Chinese economies for the next 18 months.  There are reports that Foxconn (TPE: 2354, TWD, 59.20) is considering a significant reduction in its announced direct investment into the U.S.[7]  Although the company is based in Taiwan, it has large facilities in China and may be signaling that it is going to side with China if relations cool between the two countries.

Venezuela: There’s not much new to report as the standoff continues.  However, the WSJ reports that the effort to oust Maduro is part of a broader policy to extend U.S. influence in South and Central America and curb Russia’s and China’s forays into the region.[8]  Succeeding in that goal would also undermine Cuba.  In a historical sense, the policy is consistent with the Monroe Doctrine.  The U.S. has historically worked to thwart leftist regimes in the region that could have, or did, offer alliances with the communist bloc.  Undermining Chinese influence would also make sense.  However, we do wonder how much of this policy change is coming from the president himself and how much is coming from John Bolton.  Given Trump’s Jacksonian leanings, it would make sense for him to push back against Maduro, especially when he was going to oust U.S. diplomats.  At the same time, Jacksonians tend to avoid such open-ended foreign entanglements that intervening directly in Venezuela would entail.  In other Venezuelan news, Maduro is cracking down hard in the poor neighborhoods that used to be the backbone of regime support.[9]  Chavez built his coalition on the military and the poor, isolating the merchant and middle classes.  He paid for this policy by raiding PDVSA’s oil coffers.  The drop in oil output, due in part to the lack of investment, has forced Maduro to choose between the brass and the poor.  The latter have lost out.

In the details, estimated U.S. production was unchanged at 11.9 mbpd.  Crude oil imports dropped 1.1 mbpd, while exports were unchanged.  The drop in imports may reflect the impact of Venezuelan sanctions.  Refinery runs declined 2.8% and should continue to fall in Q1.  Product stocks fell.

This is the seasonal pattern chart for commercial crude oil inventories.  We would expect to see a steady increase in inventory levels that will peak in early May.  This week’s increase was well below expectations and a bit below seasonal norms. 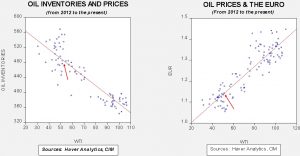