[Posted: 9:30 AM EST] The president arrived in Davos this morning and will give the keynote speech tomorrow, and the ECB met today.  Here is what we are watching:

The ECB: The ECB made no monetary policy changes, as expected.  In his press conference, ECB President Draghi didn’t veer from anything he has said before.  Interestingly enough, this was taken as hawkish.  The dollar slumped, the EUR jumped, European and U.S. bond yields rose and European equities dipped.  It does appear the financial markets were expecting a dovish statement or press conference and the aforementioned market action developed when it became evident that wasn’t coming.

Another side of protectionism: Discussions of trade policy tend to be based on academic theory.  The theoretical structure is fairly simple—mercantilism, the policy of forcing a trade surplus, will eventually lead to inflation in the nation running the surplus.  This theory goes back to David Hume (1711-1776).  The theory of competitive advantage was developed by David Ricardo (1772-1823).  Perhaps one of the most misunderstood parts is trade macroeconomics, which shows that changes in trade are tied to changes in public, private and foreign saving.  Another area that is generally underestimated is the effect of the dollar’s role as the reserve currency.  The U.S. gets to play by trade rules that no other nation gets to use.  Other nations need dollars to conduct trade; they don’t have an interest in accumulating balances in the Vietnamese dong and will thus try to conduct trade with Vietnam in dollars.  In addition, consumption represents 70% of U.S. GDP and America acts as the global importer of last resort.  If a normal nation puts trade barriers in place, import prices quickly rise as the supply contracts.  On the other hand, if the U.S. puts trade impediments in place, the foreign nation facing these restrictions still needs dollars.  Thus, they may decide to absorb the costs of the tariff by cutting prices.  In addition, the firms affected still want access to the large, open American market, which may mean directly sourcing production in the U.S. to avoid losing access to the American market.  Interestingly enough, building productive capacity in the U.S. appears to be part of the adjustment process on the recently announced tariffs on washing machines.[1]  South Korean firms have indicated they will hike prices to account for the tariff but they also announced they have built productive capacity in the U.S.

There are numerous reasons why foreign nations want to export to the U.S.  One reason is to acquire dollars.  Another is to use American consumers to build their industrial base.  Others want to boost domestic employment.  Moving productive capacity to the U.S. does undermine these goals.  However, it is also an acknowledgement that there are limits to what the U.S. will tolerate; after all, foreign nations do create structures to suppress domestic consumption and wages and undervalue their exchange rates to sell to the U.S.  These policies adversely affect some sectors of the U.S. economy, especially manufacturing.[2]  One way nations can pacify American policymakers is to move production to the U.S.  During the 1980s, after President Reagan negotiated “voluntary” auto export restraints with Japan, Japanese automakers built car plants in the U.S.  Although President Trump’s trade threats could have significant effects on America’s superpower role and global growth, foreign nations can blunt the impact by moving production into the U.S.  And, in fact, that should be the administration’s goal.  Although some members do see the trade deficit itself as a problem, in reality, nearly all elected officials in a democracy are most focused on job creation.  If foreign companies shift production to the U.S. in a bid to reduce protectionist pressures, this would be a major win for the president.  That isn’t to say there won’t be an impact on inflation.  Reducing competitive pressures from foreigners (which is also affected by a weaker dollar) will tend to lift domestic prices. 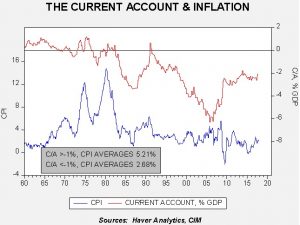 The bottom line is that if the administration’s trade policies lead to an influx of direct foreign investment and jobs in those facilities (which may not hire that many people, based on the degree of automation in these new factories), it could boost U.S. growth and improve the president’s approval rating.  If this is the outcome, it will probably be a net positive for the U.S. and help, at least partially, rebalance the costs of hegemony.

This chart shows current crude oil inventories, both over the long term and the last decade.  We have added the estimated level of lease stocks to maintain the consistency of the data.  As the chart shows, inventories remain historically high but have declined significantly since last March, by over 120 mb.  This decline doesn’t take into account the withdrawal from the SPR, which added an additional 31 mb to supply.  Taking the SPR into account, inventories fell a whopping 152 mb.

As the seasonal chart below shows, inventories fell this week.  We are at the beginning of the Q1 seasonal build season.  The fact that oil inventories fell again this week is quite bullish.  If this pattern continues we could see stockpiles drop below 400 mb later this year, which would be at the high end of normal. 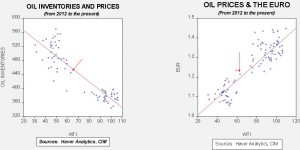 Based on inventories alone, oil prices are undervalued with the fair value price of $69.95.  Meanwhile, the EUR/WTI model generates a fair value of $70.91.  Together (which is a more sound methodology), fair value is $70.59, meaning that current prices, while elevated, are below fair value.  The weak dollar and falling oil inventories are bullish for oil prices and suggest there is more upside, especially if inventories fail to rise in their normal seasonal fashion.

The Saudi Oil Minister suggested in an interview at Davos yesterday that the IPO for Saudi Aramco may not occur this year unless conditions are favorable.  There is a general belief (which we agree with) that Saudi oil policy will be designed to boost oil prices into the IPO.  Once the offering is made, we would not be surprised to see OPEC try to regain market share which would weigh on oil prices.  If the IPO is delayed, it is bullish for oil prices.

[2] Interestingly enough, it boosts other sectors, such as finance, which recycles foreign saving into dollar assets.