Financial markets are treading water this morning after a hard sell-off yesterday.  The proximate cause was Chair Powell’s testimony to the House Financial Services Committee.  Here is what we are watching this morning:

The Powell testimony: Although his prepared remarks were unremarkable, his comments on the economy were rather upbeat.  He suggested that the combination of a fiscal tailwind and improving exports are leading to accelerating growth.  These comments were made in the context of a question on whether the median FOMC forecast of three hikes this year is still relevant.  Powell suggested that the economic outlook has improved since then, leaving open the possibility of four hikes this year.  Market reaction was swift and relentless.  Equities and fixed income prices fell, commodities dropped and the dollar rose.  The Fed chair is suggesting that, at long last, cash may become an asset class again, which is unwelcome news for nearly all other asset classes.

Was the market reaction justified?  Although pundits were belaboring the point that there wasn’t really anything new in what Powell said, there is another issue that bears examination.  Powell isn’t an economist.  We cannot observe a record of academic publications that would offer us any insight into what he actually believes.  His voting record as a member of the FOMC doesn’t provide any real insight, either—he voted with the chair.  So, in reality, we really don’t know how he personally leans in terms of policy.  The upbeat assessment of the economy could be an indication that he is more hawkish than assumed (we rate him as a “3” on our “1” (extreme hawk) to “5” (extreme dove) scale).  Again, it isn’t clear if what we heard yesterday signals any clarity on Powell’s actual policy stance.  We will probably need a series of comments and speeches before we can determine what Powell really thinks.  Until then, expect higher than normal volatility around his comments.  We will get an important clue tomorrow—if Powell did not want to signal four hikes and didn’t welcome the market reaction, he has the chance to soften his position when he testifies before the Senate Banking Committee.  It is a rather common practice for Fed chairs to adjust market expectations by using the first testimony as a sort of trial balloon.  Thus, we will be watching to see how Powell reacts to the sharp market response we saw yesterday.

Expectations of policy tightening are rising: In observing the implied three-month LIBOR rate from the deferred Eurodollar futures, the financial markets are now taking the dots plot seriously.  The charts below show that the weekly implied three-month LIBOR rate is well above the highest levels seen in 2011.  The right-hand chart shows that the FOMC tends to raise rates until fed funds match the implied LIBOR rate.  This chart clearly indicates the Fed has “runway” to raise rates significantly, toward 3.0%.  It should be noted that the implied LIBOR rate falls to the level of fed funds in several tightening cycles, signaling to the FOMC that it should stop raising rates (the crossovers are shown with vertical lines).  Thus, the implied rate doesn’t necessarily mean that a 3% rate is a guarantee.  But, it does suggest that, for now, the financial markets are discounting tightening.

Is the economy doing all that well?  There is no evidence of recession, but the economy isn’t all that robust, either.  Below we note Q4 GDP data.  The Atlanta FRB GDPNow assessment is that Q1 growth is going to be in line with Q4. 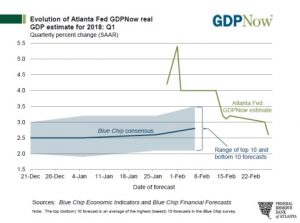 In looking at the estimates of contribution to growth, weakening consumption is the largest element of the declining forecast, which began at 4.2% and has declined to 2.6%. 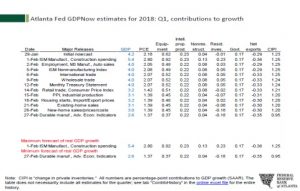 Brexit is evolving into a political crisis: PM May is rapidly being pulled into a political maelstrom.  Her party is a mix of “hard” and “soft” Brexit supporters.  The soft supporters accept an EU exit but want to remain in the trading union.  This would not be a good outcome; the U.K. will then be forced to accept migrants and EU rules without the benefit of representation.  However, remaining in the trading union will preserve London’s role in finance and bring less disruption to the economy.  The hard exit supporters want a complete break with the EU; this stance has proven difficult to manage.  The EU is pushing for a hard border between Northern Ireland and Ireland which could undermine the fragile peace deal between those two states.  The disruption to the economy from a hard Brexit could be massive.  PM May has been trying to weave a path between these two camps in her party; our read is that the majority of her members are hard Brexiteers but the actual majority in Parliament are soft Brexiteers.  This division is being exploited by the head of the Labour Party, Jeremy Corbyn, who has positioned the Labour Party to support a soft Brexit.  Corbyn’s position is threatening to divide the Tories, who only have a majority in government because of a coalition with a small Unionist party in Northern Ireland.  So far, 10 Conservative MPs have come out in favor of a soft Brexit.  Given that the Tory/DUP coalition only has a one-seat majority, PM May is under threat of a no-confidence vote.  If she loses, we expect elections and there is a real possibility that a Labour coalition could gain power.  A Corbyn-led government will terrify the financial markets.  For the U.S., it would be a preview of a Sanders or Warren presidency.  Although we still believe the GBP is cheap, all bets are off if the May government falls.

Rethink on TPP?  At an NPR interview, Treasury Secretary Mnuchin indicated he is engaged in “high level talks” with the other 11 members of the TPP and the U.S. might consider rejoining the group.  His comments were not a complete surprise; President Trump suggested something similar at Davos.  Without details, it’s hard to understand what rejoining TPP would look like, but we think this is further evidence of the establishment/populist divide within the Trump government.  The populists are horrified by trade and see multilateral agreements as job killers; the establishment sees agreements like NAFTA and TPP (and TTIP) as (a) ways to contain inflation and labor costs, and (b) methods of maintaining America’s superpower role.  We suspect the president uses the TPP comments as a way to encourage the establishment members of his coalition but, without actual action (and we don’t expect any to occur), this is just talk. 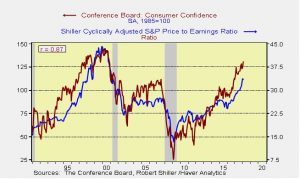