[Posted: 9:30 AM EST] We continue to watch the drama in Washington.  What we find most interesting is that equity markets continue to churn higher despite the turmoil.  We believe there are two reasons for the continued strength.  First, earnings are continuing to edge higher and thus prices should rise so long as multiples remain steady.  So far, the issues in the capitol haven’t led to a loss of confidence.  Second, as we have discussed regularly, we see the Trump administration as the populists against the establishment, or “Bannon versus Ryan.”  As conditions deteriorate, Ryan is winning.  Flynn’s departure and reports of investigations of Russian ties to the Trump campaign will likely pressure the Bannon wing, which seems supportive of Russia.  If the Bannon wing weakens, the void will be filled by the establishment, meaning the Trump presidency evolves from a champion of populist change to a traditional Republican center-right administration.  That means more focus on deregulation and tax cuts, less on trade and immigration restrictions.  Until Trump’s troubles affect the GOP’s ability to pass tax cuts and deregulation, equity markets will remain supported.

Chair Yellen’s comments yesterday were upbeat about the economy.  The Fed raising rates into economic strength isn’t a bad outcome for equities, although it is bearish for fixed income.  She didn’t lay the groundwork for a March hike but made a clear case for at least two hikes, and likely three, from June into December.

With the release of CPI, we can update our Mankiw Rule models.  The Mankiw Rule models attempt to determine the neutral rate for fed funds, which is a rate that is neither accommodative nor stimulative.  Mankiw’s model is a variation of the Taylor Rule.  The latter measures the neutral rate using core CPI and the difference between GDP and potential GDP, which is an estimate of slack in the economy.  Potential GDP cannot be directly observed, only estimated.  To overcome this problem with potential GDP, Mankiw used the unemployment rate as a proxy for economic slack.  We have created four versions of the rule, one that follows the original construction by using the unemployment rate as a measure of slack, a second that uses the employment/population ratio, a third using involuntary part-time workers as a percentage of the total labor force and a fourth using yearly wage growth for non-supervisory workers. 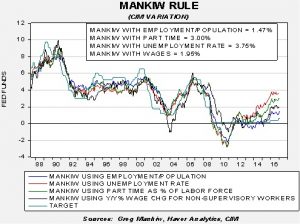 Although we have seen this situation before, Greece is facing another crisis.  This time, the IMF wants Greece to receive some form of debt relief; although write-offs will eventually occur, the IMF would probably accept restructuring (extend maturities and reduce rates).  The EU (read: Germans) will have none of this and insist that Greece run a primary surplus[1] of 3.5% of GDP.   This austerity is almost impossible for Greece to achieve but there is little political space for compromise with elections looming across northern Europe.  German Finance Minister Schäuble has made it clear that either Greece meets the EU’s demands or it can leave the Eurozone.  So far, when faced with this choice, the Greeks have caved.  But, at some point, leaving will become more attractive.  The risk for the Eurozone is that if Greece leaves and prospers, it will be difficult for Italy and Spain to stay.  If these nations leave, the Eurozone as we now know it is finished.  How it will evolve remains to be seen but the risks surrounding European investments will be elevated.