[Posted: 9:30 AM EDT] It’s very quiet this morning.  The dollar is rebounding and precious metals are lower.  The focus appears to be on the Fed and Jackson Hole.  Here is what we are watching today:

The Fed minutes: The minutes held no big surprises—the FOMC is preparing the market for another hike in September and seems to be leaning toward one more after next month, bringing the total to four for 2018.  There was some discussion about removing the term “accommodative,” which would signal that the central bank has at least ended its extraordinary policy easing.  There was further discussion about inverting the yield curve.  The committee does appear divided on this issue with some members suggesting that changing market conditions have changed the relationship of the yield curve and the economy, rendering it less effective as a business cycle signal.  We find the theoretical discussions on the yield curve unconvincing; until proven otherwise, the yield curve has a good (not perfect, but good) record of signaling changes in the business cycle.  We also note there was some discussion on what policy tools the FOMC has when the policy rate target reaches zero.  The Fed shows no inclination to deploy negative rates (as seen in Europe) and intends to rely on forward guidance and balance sheet expansion, admitting that these tools are less than ideal.[1]  Overall, as we noted, there was nothing unexpected in the minutes.

Powell in Wyoming: The Jackson Hole meetings, hosted by the KC FRB, begin today.  Chair Powell speaks tomorrow.  We expect him to signal continued rate increases as noted in the Fed minutes.  We will be watching closely to see if he says much about emerging markets.  There has been a growing chorus of discontent from emerging economies, warning that continued tightening is a threat to those economies.  The Fed mandate doesn’t include its global impact; in general, the Fed tends to ignore the world until a global crisis affects the U.S. economy.  We would expect some comments about Fed independence; although President Trump has been critical of Fed policy, we don’t expect Powell to adjust policy to these criticisms for now.

Turmoil in Italy: Fears of economic mismanagement by the populist coalition in Italy are leading to an exodus of investors in Italian bonds.[2]  There are growing fears that the government’s upcoming budget, expected to be revealed in October, will expand spending beyond Eurozone constraints.[3]  Government figures are framing the tensions as establishment neoliberals in the EU and broader markets trying to keep Italy down.[4]  We are hearing rumblings that the recent bridge collapse is actually working in favor of the government.  Public opinion appears to be taking the position that the collapse should be blamed on earlier governments that adopted the orthodox policies the Eurozone pushed on Italy.  We note that a recent video of Matteo Salvini attending the funeral of some of the bridge victims was warmly received by attendees.[5]  Events such as these will tend to embolden the current government and likely force a confrontation between Italy and the Eurozone (read: Germany).

Trade: New tariffs between China and the U.S. will go into effect today and there are hearings in place for another round of tariffs that would affect $200 bn of trade with China.  To recap, $50 bn have already occurred and $16 bn in additional tariffs start today.  Talks continue but we have serious doubts that these negotiations will avoid another round of tit-for-tat actions.

Turkey: John Bolton indicated that Turkey could end its crisis with the U.S. by simply releasing Pastor Brunson.[6]  That assertion contradicts statements from the president, but Bolton may be trying to create a ramp that would reduce tensions with the Turks.

An epic crisis brewing: We have been reporting on and off about the economic collapse in Venezuela.  The focus is now shifting to the refugee crisis it is causing.  Brookings[7] is estimating that up to 4.0 mm Venezuelans have left the country, about 10% of the population.  In comparison, the war in Syria created about 5.0 mm refugees.  As we reported earlier in the week, the USNS Comfort has moved to Colombia to assist that country in dealing with the outflow of refugees.  Brazil is considering closing its border with Venezuela to stem the tide.[8]  Given the outflows, it is only a matter of time before we start to see Venezuelans showing up on U.S. borders.  To get a glimpse of what caused the crisis, note the picture below…that stack of bills is what it costs to buy that roll of toilet paper.

Turmoil in Australia: PM Turnbull appears to be on his way out.  He has faced a series of leadership votes and resignations in his cabinet over the past two weeks.  Turnbull’s problems are not unique.  He is managing a National/Liberal Party that is divided between conservative and moderate wings.  The PM has tried to placate both sides but is facing a rebellion from conservatives.  The coalition only holds a single-seat majority in the legislature, meaning the government’s hold on power is tenuous anyway.  Since 2007, Australia has had five PMs, a reflection of the unsettled nature of the country’s political situation.  If Turnbull resigns, there is a chance of elections and a return to power for Labour.  The AUD has declined on the news.

Saudi Aramco IPO is off…or not?  Reuters is reporting that the Kingdom of Saudi Arabia (KSA) has called off listing the state oil company on either international or domestic exchanges.[9]  Corporate governance was said to be the sticking point; the royal family didn’t seem to want to reveal the levels of cash that flow within the kingdom.  However, this report was rebutted by Energy Minister Khalid al-Falih, who indicated that the deal is still on but delayed until a petrochemical IPO is completed.[10]  It isn’t clear how important the listing was to funding KSA’s long-term development but the combination of higher oil prices and concerns about state secrets has apparently caused Saudi leaders to back away from the IPO.  If the IPO is really dead then it is potentially bearish for oil prices.  As long as the IPO was possible, the KSA had an incentive to keep prices elevated.  With it being postponed indefinitely, the KSA can be more open to pushing prices lower if it decides lower prices are necessary to slow U.S. oil production.  However, we suspect the Saudis will still try to keep prices elevated for now because they could use the money without the IPO.  We note that Saudi foreign reserves have stabilized as oil prices have recovered.  History shows that Saudi foreign reserves tend to follow oil prices with a two-year lag. 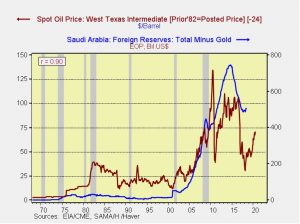 An EU S.W.I.F.T.?  Germany’s Foreign Minister Heiko Maas is calling for the creation of a new payment system that is independent of the current system.[11]  The Society for Worldwide Interbank Financial Communications is the backbone of bank communication systems.  When a country is denied access to the system, it is essentially unable to move money within the global financial system.  The U.S. pressed the organization (based in Brussels) to remove Iran from the system in an earlier sanctions regime; it was this measure that likely led Iran to negotiate the recent nuclear deal.  When the U.S. left the deal and reapplied sanctions on Iran, it again pressed Europe to end economic ties with Iran, which the EU has resisted.  If the U.S. implements the second phase of sanctions in November, S.W.I.F.T. will be forced to comply with U.S. sanctions.  It isn’t obvious if the EU could actually form a separate system because it would need some sort of interface to the U.S. financial system to be effective.  But, the comment on its own shows the degree of disagreement that is developing between the U.S. and Europe.  In a late development, we do note that Chancellor Merkel is apparently not on board with this idea.[12]

This chart shows current crude oil inventories, both over the long term and the last decade.  We have added the estimated level of lease stocks to maintain the consistency of the data.  As the chart shows, inventories remain historically high but have declined significantly since March 2017.  We would consider the overhang closed if stocks fall under 400 mb.  This week’s decline in inventories was normal and an almost complete reversal from last week’s unexpected increase.  Refinery utilization remained elevated at 98.1% of capacity.  Oil imports fell sharply, to 7.5 mbpd, up 1.5 mbpd from the prior week.  We note that U.S. production did rise 0.1 mbpd to 11.0 mbpd. 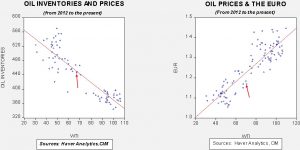 Based on inventories alone, oil prices are near the fair value price of $69.50.  Meanwhile, the EUR/WTI model generates a fair value of $57.22.  Together (which is a more sound methodology), fair value is $61.00, meaning that current prices are well above fair value.  However, the most bearish factor for oil is dollar strength.  It will be difficult for oil prices to move higher without some reversal in the greenback.