Since late August, interest rates have been steadily rising.  The 10-year T-note yield made its recent low at 2.82%[1] on August 4th.  Since then, yields have moved above 3.00%.

Our 10-year T-note model suggests rates are a bit elevated. 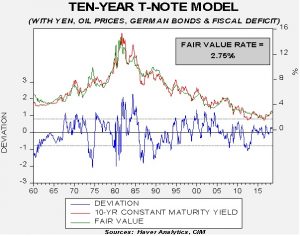 This model includes fed funds and the 15-year moving average of inflation (a proxy for inflation expectations) as the core variables.  These two variables explain more than 90% of the variation in the interest rate on this T-note.  The additional variables, the yen, oil prices, German bund yields and the fiscal deficit, are all statistically significant but have much less explanatory power than the core variables.  Based on the core variables alone, the fair value yield is 3.45%.  The weak yen and low German rates (currently around 42 bps) are mostly responsible for the lower fair value reading in the full model.

In the short to intermediate term,[2] the two variables we are watching most closely are fed funds and German yields.  Fed funds expectations have been increasing due to robust economic growth and expectations that the FOMC will contain any potential inflation threat.

The chart on the left shows the implied three-month LIBOR rate two years into the future.  It has recently ticked higher to 3.135%.  The chart on the right shows that FOMC policymakers tend to use this rate as a policy target.[3]  In a tightening cycle, the FOMC tends to raise rates until fed funds reach the aforementioned implied LIBOR rate.  The vertical lines on the right chart show when inversion occurs.  Policy tightening usually stops at that point.  Given the current implied rate, this would lead to a terminal fed funds target of 3.25%.

If we assume a 3.25% rate and no other changes, the fair value for the 10-year yield rises to 3.28%.  Thus, it is reasonable to assume that much of the rise in yields over the past month has been due to the market preparing for future rate hikes.  The low level of German yields is also a concern but even taking bunds to 1.00% only raises the fair value yield to 3.40% (assuming a fed funds rate of 3.25%).

[3] We don’t know for sure if this is overt or coincidental, although we suspect the latter.