Happy employment data Friday!  We cover the data in detail below but here is the snapshot—it was mixed.  The payroll report was soft, but wage growth and the household survey were rather strong.  Financial markets are taking the report as weak, focusing on the payroll data.  In other news, Powell speaks today, the PBOC reduced reserve requirements and Robert Mugabe has crossed over the earthly veil.  Gold is lower on the rebound in interest rates.  Here are the details and other items we are watching:

China:  As widely anticipated, the People’s Bank of China reduced the amount of reserves that commercial banks are required to hold at the central bank.  The reserve requirement ratio will be cut by 50 basis points for most banks, and by 100 basis points for certain medium and small institutions.  The cut is expected to increase the amount of funds available for lending by approximately $126 billion.  The move is part of a modest package of stimulus measures that the government has been rolling out over recent months to cushion the economy from the U.S.-China trade war.  Investors are likely to cheer the move, but it’s still not clear how much the measures will really help.  Excessive debt throughout the economy will probably continue to limit borrowing, while uncertainty over the trade situation will likely keep weighing on investment and hiring.

Hong Kong:  Fitch Ratings has downgraded its credit rating for Hong Kong to AA from AA+, with a negative outlook, based on increased political instability.  The company suggested Beijing’s reaction to the city’s continued anti-China protests pointed to less policy flexibility for Hong Kong’s government and greater integration with the mainland, which would imply that the city’s rating should be closer to the A+ rating assigned to China.  The downgrade is another reason to think Hong Kong assets will remain under pressure in spite of Chief Executive Lam’s withdrawal of her controversial extradition bill this week.

Trade uncertainty:  Although there is no doubt that the administration’s trade policy is having an impact on the economy, getting a precise gauge on the effect is difficult.  A research group, PolicyUncertainty.com, has created a series of uncertainty measures based on the level of news reporting on a category, the number of tax code provisions due to expire and the dispersion of forecasts among economists on a certain category.  With regard to trade, we are at the highest level of uncertainty since the initial NAFTA negotiations. 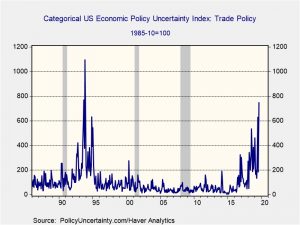 A research paper by economists at the Federal Reserve suggests the trade situation will probably reduce U.S. GDP growth by about 1%.

Recessions tend to come from two causes—policy errors and geopolitical events.  The former is measurable by looking at the economic data.[1]  The latter is trickier.  Although we pay close attention to geopolitical issues, each event is unique and the impact of such events tends to be cumulative, therefore assessing causality to a particular incident is difficult.  The trade conflict falls into this category; we view the administration’s trade policy as part of America’s rejection of the hegemonic role that we have shouldered since 1945 and so the anti-trade policy, in one form or another, will outlast President Trump.[2]  Our worry is that the trade war could either (a) accelerate the onset of recession, or (b) deepen a recession when one occurs.  If the Fed researchers are right, a 1% decline in GDP next year, due to the trade conflict, will reduce growth to the point where a recession will be difficult to avoid.

United Kingdom:  Labour Party shadow chancellor John McDonnell warned today that if he had control of the Treasury, he would impose severe constraints on British financial firms.  McDonnell said he would work especially hard to ban large bonuses, which he said are offensive to people and a large source of inequality.  Increased regulation of financial services would be consistent with the radical left-wing program laid out by Labour Party leader Jeremy Corbyn, which includes the nationalization of multiple industries and huge increases in the minimum wage.  McDonnell’s statement therefore illustrates the kinds of policy risks that would arise in Britain if Prime Minister Johnson loses power to Corbyn.  More broadly, we think it also reflects the left-wing direction that today’s populism might be headed toward after transitional figures like President Trump and Prime Minister Johnson pass from power.

Brexit:  Even if Prime Minister Johnson can extricate Britain from the EU as he wants, many observers have noted that he would probably have only limited bargaining power in any post-Brexit trade negotiations with the United States.  Now, it appears he’s also undermining his position for any post-Brexit negotiations with the EU.  Johnson’s team this week warned the EU that they wanted to abandon prior commitments made by Theresa May to keep British environmental and social standards similar to the EU’s in order to secure a bilateral trade deal.  Various EU officials say that would make it very difficult to gain approval for a deal.

There is another facet of Brexit that is worth exploring.  The Brexiteers may be underestimating the role of Ireland in Brexit.  We, like others, are guilty of focusing on the major powers in the EU—thus, we pay close attention to what is happening in Germany, France, the U.K. and Italy.  However, an important element to joining the EU is the power it gives the smaller nations in Europe.  A small nation in Europe that isn’t part of the EU has little power; it will never have a significant enough military to protect itself from larger powers and its economy is subject to the influence of the larger states in the EU and the world.  By joining the EU, the small states get the protection of NATO and have a vote on economic policy.  Thus, the EU may be seen, at times, as a constraint on the larger nations but it is a force multiplier for the small states.

This factor is playing a role in the Irish backstop issue.  The smaller EU states are viewing the Brexit supporters’ position on the backstop as a big nation attempting to push around a smaller one.  This dynamic could make it very difficult for the EU to give any ground on the backstop issue; it isn’t just that it is hard to come to a unanimous agreement among the EU nations, but it’s also that the smaller states see this as a test of how the EU will support a smaller state against a “bully.”  In the end, if the U.K. follows through on Brexit, the eventual deal may require that Northern Ireland remains in the EU trading area to ensure the trade zone integrity of the EU.  One proposal made by the negotiators was to put the trade border at the Irish Sea, effectively keeping Northern Ireland within the EU trade zone.  When former PM May lost her party’s majority in snap elections, she was forced to form a coalition with the DUP, a unionist party in Northern Ireland.  The DUP strongly opposed the prospect of Northern Ireland remaining in the trade union, rightly fearing that this will be the first step in unifying Ireland.  If PM Johnson were to win the upcoming election and continue to press for leaving, the eventual cost of Brexit might be Northern Ireland.

Japan-South Korea:  Even though the dispute over Japan’s behavior in Korea before and during World War II has cooled a bit recently, new ordinances in two South Korean cities show it still isn’t completely over.  The city councils of both Seoul and Busan have passed nonbinding ordinances designating 284 Japanese firms as “war crimes companies” and discouraging purchases from them.

Iran:  The Iranian government announced that it would cease following restrictions on its nuclear research contained in its 2015 nuclear deal with the West.  That follows earlier moves to violate the deal’s limits on how much nuclear material it could stockpile and how highly it could enrich uranium.  The violations aim to put more pressure on European governments to come up with compensation for U.S. sanctions imposed after the U.S. pulled out of the agreement.  The violations are likely to keep tensions high in the Middle East, which should continue to keep oil prices higher than they would be otherwise.

Mexico:  The chairman of the Chamber of Deputies budget committee, who is a key member of left-wing President Andrés Manuel López Obrador’s party, has introduced a bill to apply Mexico’s value-added tax (VAT) to digital services.  Currently, internet services and the like aren’t subject to the tax in Mexico.

In the details, U.S. crude oil production fell 0.1 mbpd to 12.4 mbpd.  Exports were unchanged, while imports rose 1.0 mbpd.  Refinery operations fell 0.4%.  The drop in stockpiles was mostly due to reduced production.

The above chart shows the annual seasonal pattern for crude oil inventories.  As we approach the end of spring/summer inventory withdrawal, we are starting the autumn rebuild period at a sizeable deficit.  Without aggressive increases in stockpiles, we will likely continue to lag seasonal patterns. 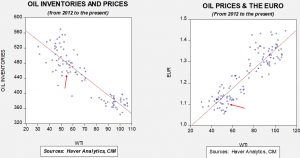 Based on our oil inventory/price model, fair value is $66.39; using the euro/price model, fair value is $53.44.  The combined model, a broader analysis of the oil price, generates a fair value of $57.68.  We are seeing a clear divergence between the impact of the dollar and oil inventories.  Given that we are nearing the end of the summer driving season, the bullish impact of inventories will likely diminish in the coming weeks; a sideways to lower price path is the most likely outcome.

[1] We have a report on this.  See our Business Cycle Report.

[2] Interestingly enough, Chairman Xi seems to agree with our assessment that what we are seeing is a fundamental change in the world order.